Some lace patterns contain double yarnovers, which are used to add two stitches in the middle of the work as well as adding a decorative hole. (The word yarnover makes me think of turnovers. Yum!) 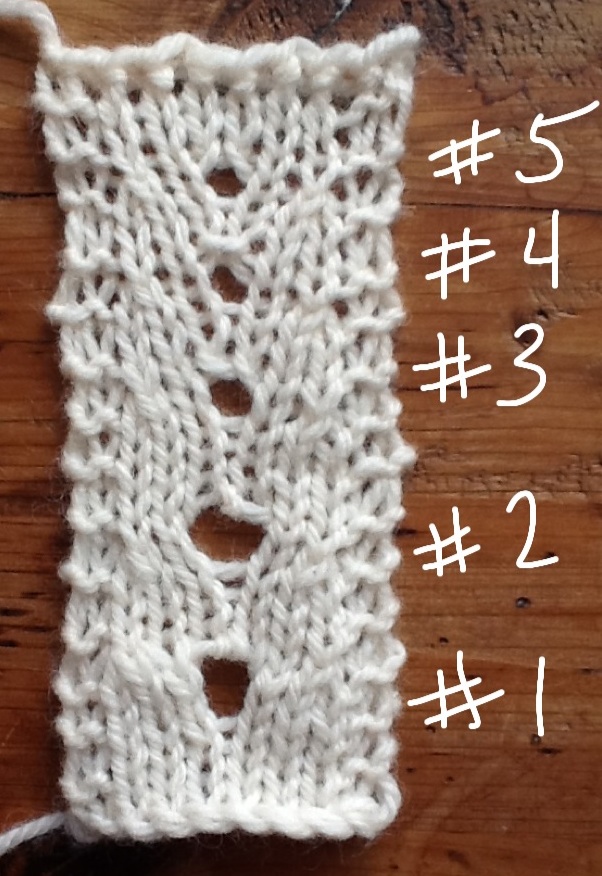 The question I’ve seen from people who haven’t dealt with them before is how to work them on the next row or round. There’s two loops on the needle 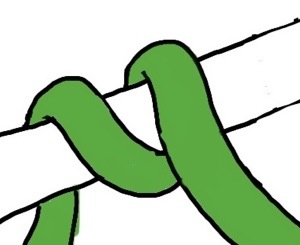 but if you knit each loop the way you would a normal stitch, it won’t make two stitches, which is undesirable.

The standard way to work them, as described by Barbara Walker and many others, is to knit the first loop, slip it off, and then purl the second loop. (Double YO #1 in the photo above) You can reverse the order, but it makes a funny little knot in between the two stitches. (Double YO #2.)

Another technique I learned about more recently is to knit or purl through each loop, but to twist them as you go. (Double YO #3) This seems to be rather less well-known, and is a useful basis for Double YOs #4 and 5 above, so I’m going to write about it here.

There’s one finicky thing about it, in my opinion, and that’s loosening each loop up enough to get the needle through. If your yarn is thick enough, you can pinch the bottom of the loop and pull it down to get some slack: 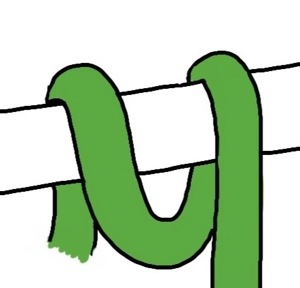 Then you can twist the loop and either knit or purl it.

Alternately, insert your needle as if to purl, 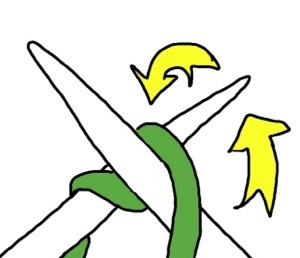 then slide it around under the yarn so that it’s behind the other needle. 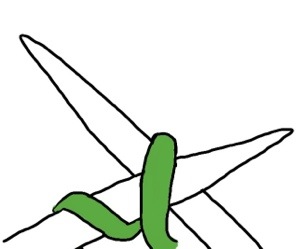 If you’re knitting it, it’s in the perfect spot to go ahead. If you’re purling, you’ll have to remove the needle and hold onto the slack with your other hand while bringing the needle in from behind. 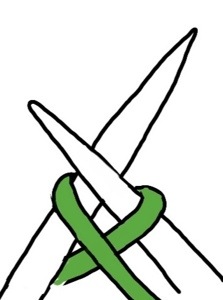 Once you’ve worked the first YO, work the second one the same way you did the first, so that both are knit or both are purled.

Note that since the loops are twisted, the double YO is smaller. Sometimes this is a benefit; sometimes it’s not. What I like about this technique is that it works really well when you start getting more than two yarnovers in a row. (For an example, see the Auge doily — Ravelry link.)

Now that’s all very well and good, and is sometimes the best option, but it’s asymmetrical, and I’m often in favor of symmetry. I was thinking about knots one day. A twisted yarn over loop is basically the same as a half hitch. When I was a child, I was taught a knot that we called a whole hitch, but that is more commonly called a lark’s head knot. A lark’s head knot is two half hitches in a row, but one half hitch is twisted in the opposite direction from the other, so that they mirror each other.

Why not, I thought, mirror the twist in the two YOs for more symmetry? Here are the results of this experimentation. I’m going to call this the lark’s head stitch, though surely someone else must have come up with it and called it something else.

This is a case where it matters which order you make the stitches in depending on the effect you want on the front of your work. Both Double YO #4 and 5 above are worked with a lark’s head stitch.

Twist and work the first loop as shown above.

Now, drop the second loop. Don’t worry! It won’t run; it can’t, since there’s no stitches below it. Now, bring your non-active needle in from behind to pick up the loop again so that it sits on the needle in the opposite direction.

Now, either knit or purl the YO leg that’s in front of the needle so that the YO is twisted as you work it.

Drop both loops of the double YO. Bring your non-active needle in from behind to pick it up as if it’s one stitch, like this:

Twist it as you knit or purl it. There should still be some slack in the long loop you dropped; pick that up again so that it sits like this on the needle:

Have fun! Play around! See if this makes you think of something else to try!

6 thoughts on “Of double yarnovers and lark’s heads.”