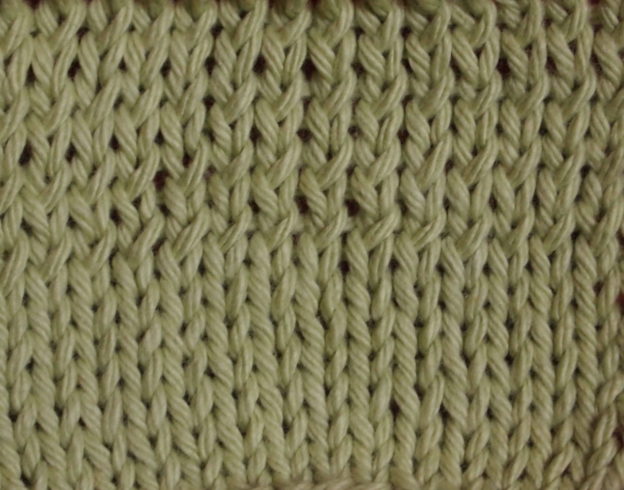 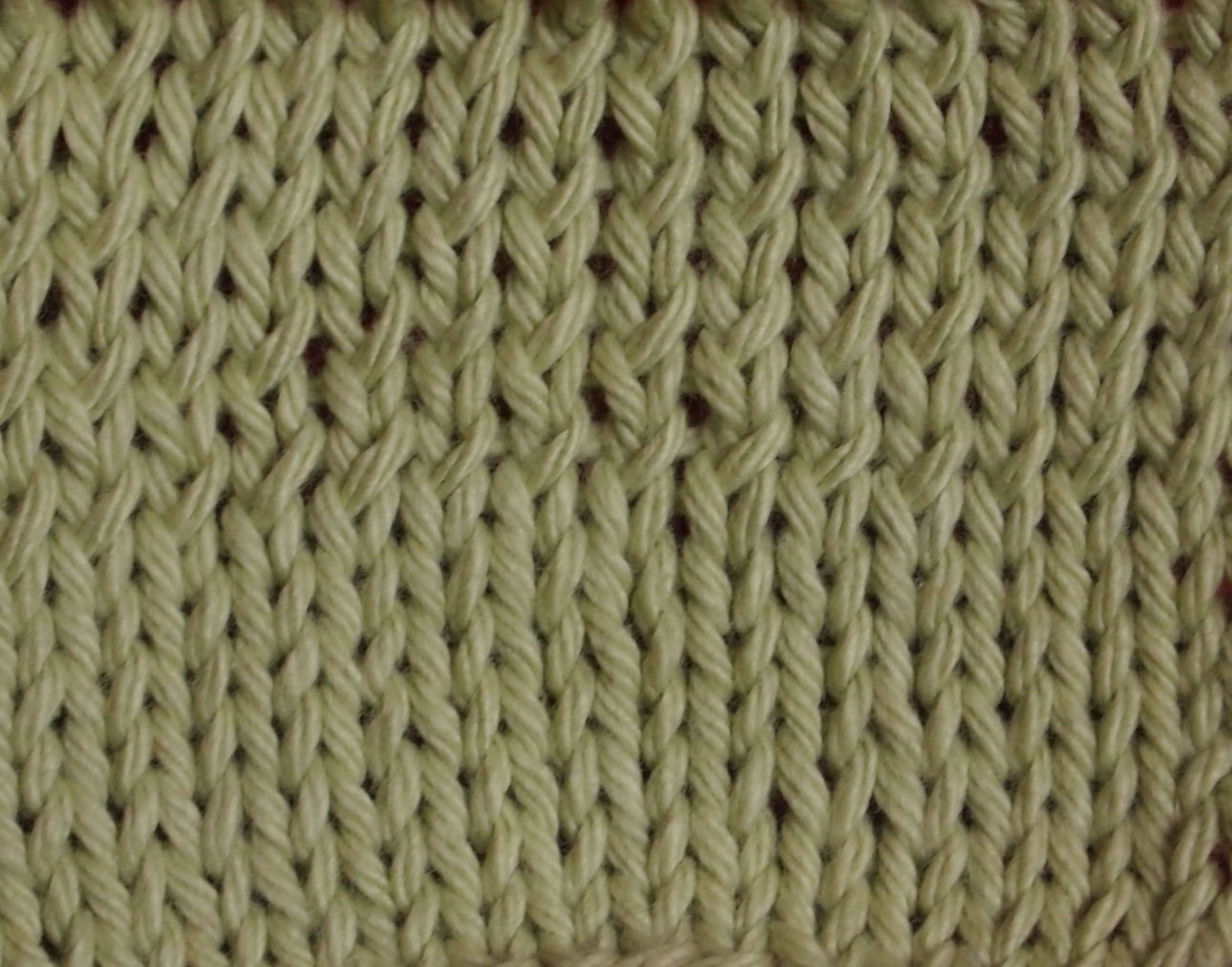 (Tunisian crocheters, this is somewhat relevant to your interests. Think about the loops from the forward pass of a row as knitting stitches and think about how they interact with each other from row to row. I’ll be talking about this in more detail another time, but I think it might be a useful thought exercise.)

or, for that matter, some of each.

The reason for the difference is that the knit stitches themselves sit flat in the fabric once they’ve come off the needles, but to sit on the needles, they need to be twisted partway so that one leg of the stitch sits in front of the needle and the other sits behind. Which way it twists depends on the direction that the yarn is wrapped around the needle.

I’m not going to go into the geography and history in an in-depth fashion; there are people who have written about this more extensively: Annie Modesitt and Priscilla Gibson-Roberts, among others. The Eastern stitch mount shown above is more common in Asia and other parts of the world near there. Some people use one or the other, and some people use both (one for knitting and one for purling).

The Western stitch mount is most common in Europe and in parts of the world with European heritage (the US, Canada, Australia…) but sometimes someone who has taught themselves to knit will accidentally come up with a method where one is used for knitting and the other is used for purling. When this is done deliberately, with no accidentally twisted stitches, it’s called Combined, or Combination, Knitting.

Regular Combined Knitting means that when you make a knit stitch, it will be sitting on the needle in the Western stitch mount; purl stitches have the Eastern stitch mount. There’s also what’s called Reverse Combined Knitting, which is what I use (it’s rather less common, but I have met people who did it by accident): knit stitches end up with a Eastern stitch mount; purl stitches are Western. Combination Knitting seems to be more common for continental-style knitters; Reverse Combination for people who throw the yarn with their right hand.

Combination knitting of either variety has advantages and disadvantages. Two advantages have to do with having more even row gauge, which eliminates rowing out, and faster speed (the Eastern continental-style purl can be faster than a Western one).

The reason that you can get more even row gauge with the two kinds of knitting is that the Western knit and the Eastern purl are a bit tighter than the Eastern knit and the Western purl. If you do both knits and purls in the same direction, one row of flat stockinette will be looser than the other; if you combine the two styles, your stitches will be be closer to the same height.

It can also be convenient when knitting ribbing or seed stitch to be able to feel what you did on the previous row just from the angle of the stitch. It takes practice, but it’s a help.

The disadvantages have to do with what happens if you don’t know that you aren’t knitting in the more standard European style: when you come to stitches that are sitting in the Eastern position and you treat them as if they were Western, you’ll tend to twist them (which makes your knitting look different, makes your stitches tighter, and makes your projects use more yarn).

The bottom section of the swatch at the top of the post was worked in Reverse Combined knitting without twisting any stitches; the top part has the relevant stitches twisted. You can see the difference. Sometimes twisted stitches are desirable, but they should only happen when you want them to.

I’m going to break this down into two parts. First, how to manage the two stitches when you come to them to avoid twisting. Second, how to create the two different stitches.

Many instructions will tell you to knit or purl the front loop without considering which loop is in front (because they assume a Western stitch mount). I find that it’s best to think of the front of the stitch or the back of the stitch as if it were sitting flat, parallel to the fabric. While the stitch is twisted, it’s not actually twisted exactly 90 degrees: it’s actually leaning in one direction or the other.

In the case of the Western stitch

the front of the stitch is facing toward your left. 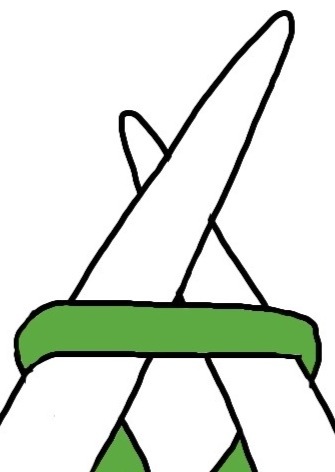 To knit it, you would insert your needle between its legs from the front left. (And the same for slipping it knitwise.) 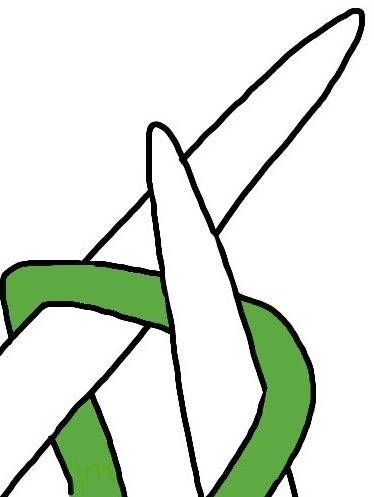 To purl it, you would insert your needle from the back right. (And the same for slipping it purlwise.)

For the Eastern stitch, the front of the stitch is facing your right. 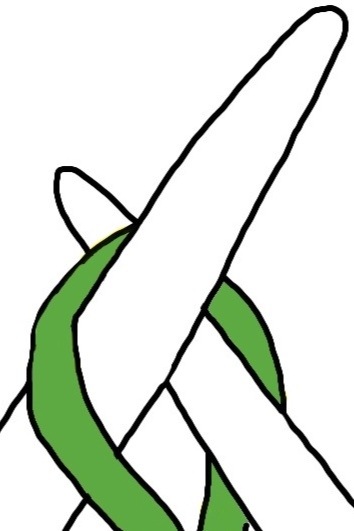 To knit it, you insert your needle from the front right. (The same for slipping it knitwise) 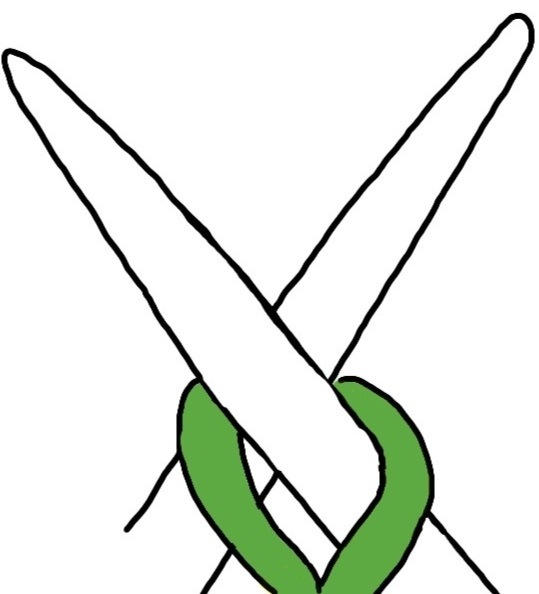 To purl it, you insert your needle from the back right. (The same for slipping it purlwise.)

So, how are the different stitch mounts created?

There are about a million and a half websites that will explain how to knit Western stitches (though they won’t call them that). I don’t see any reason why I should add to the collection. Instead, I will refer you to the videos at http://knittinghelp.com/.

Yarn held in the left hand

If you hold your yarn in your left hand, along with the inactive needle, and pick up new stitches with the active needle, this is the section you want. Don’t worry about whether the older stitch that’s on the left needle is Western or Eastern; the important thing is how the new yarn interacts with the right needle.

You will probably be interested primarily in Combination knitting, in which case the Eastern purl is what you’ll be interested in. 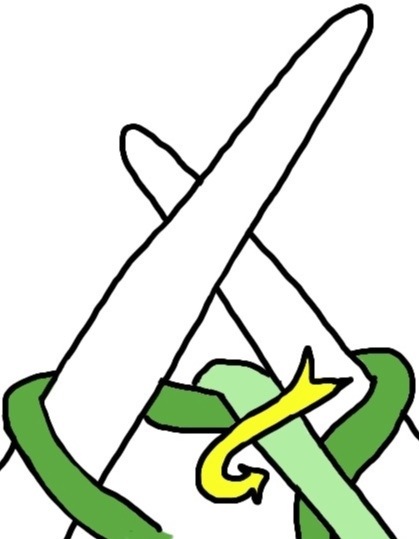 Bring the needle over the new yarn and pull it through to make a new stitch.

I’m including the Eastern knit for completeness and because if you get good at this, you can set up left leaning decreases in the round so that you don’t need to slip the stitches to put them in the correct orientation. 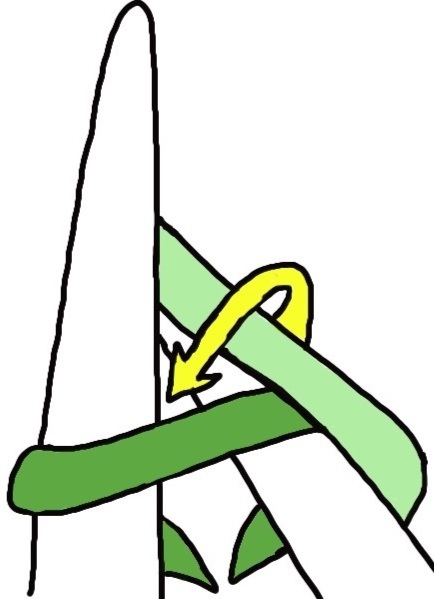 Bring your needle through the front of the stitch and continue the motion from left to right under the new yarn on your finger. Bring the needle back over the yarn and pull it through.

Yarn held in the right hand

If you hold the yarn and active needle in your right hand and throw the yarn around the active needle to make a stitch, this section is for you. Don’t worry about whether the older stitch that’s on the left needle is Western or Eastern in the picture; the important thing is how the new yarn interacts with the right needle. 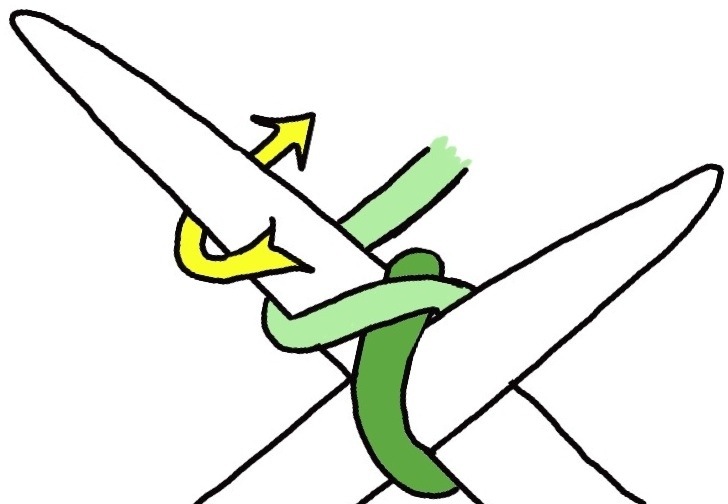 Bring the needle through the stitch from front to back, lay the new yarn between the needles, and then bring it around behind. Pull the new stitch through.

I include the Eastern purl for completeness and because sometimes it’s nice to be able to set up your left-leaning decreases in the previous row. 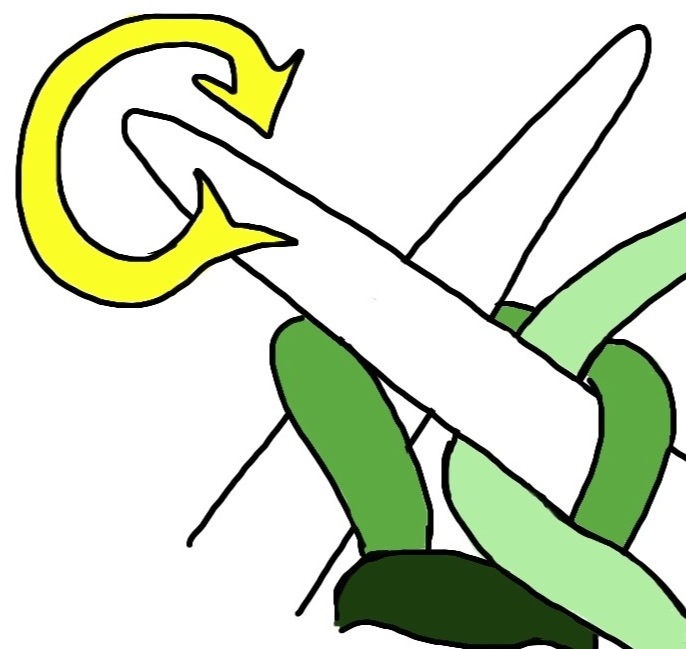 Bring your needle through the stitch from back to front, bring the yarn in front of the stitch, and then bring it back between between the two needles. Pull the new stitch through.

And that’s that, at least for now. Please let me know if you have any questions!