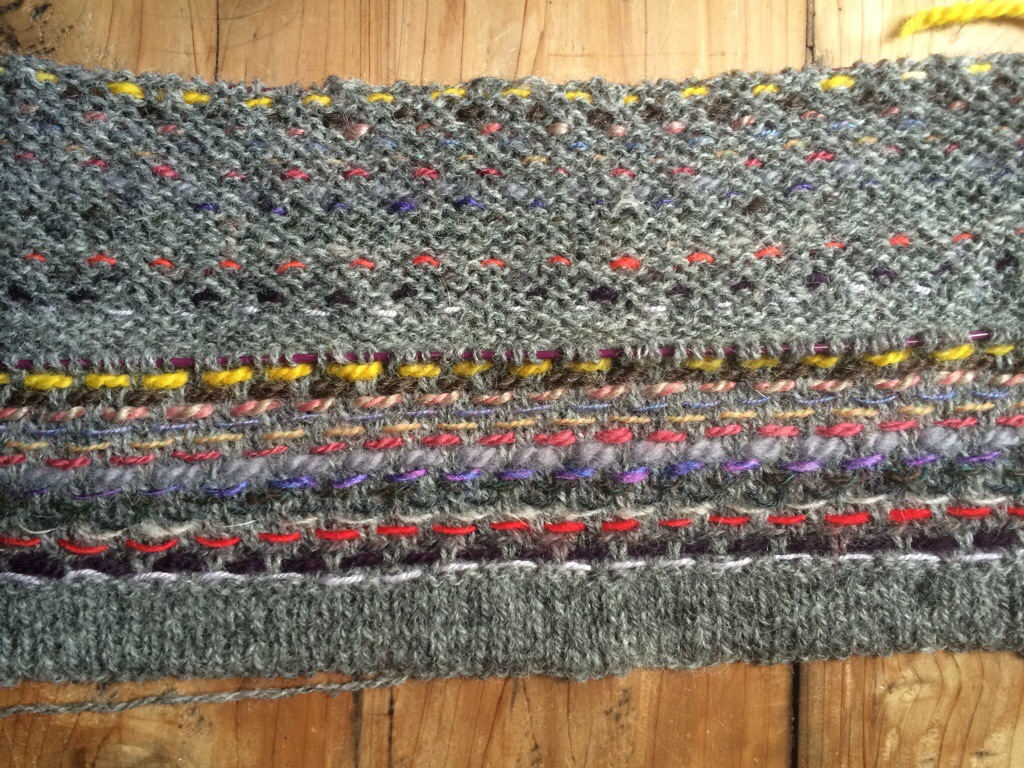 (More recently I’ve been using the term inlay instead of knitweaving; inlay comes from June Hemmons Hiatt’s The Principles of Knitting.)

I was browsing through Montse Stanley’s Knitter’s Handbook a couple of months ago, looking for information for a design project that’s still in process when I came across the entry for knitweaving (again; I’ve certainly browsed the book a lot). This time it intrigued me, and turned out to be a good method to use for a personal project, shown above. It’s going to be a stole made from a grey background yarn, decorated with handspun yarn received in a swap with the friends who spun it. The “back” of the fabric is in the top of the picture and the “front” is at the bottom. (I like both sides in different ways.)

I was telling my friends about the method and went looking online for more information to share. I was only slightly surprised to discover that the only discussions of the technique were from the perspective of machine knitters – I’d really only ever seen that one half-page of information in Stanley’s book and hadn’t ever seen any other non-machine-knitter using or discussing it.

So. What is knitweaving? It involves carrying a second strand of yarn (I’ll call it the weft, since that’s the weaving equivalent) across a row of knitting as decoration without ever working a stitch with it.

There’s two ways of doing this. The first is more likely to be familiar to knitters who have woven in ends in stranded knitting, where it’s called “weaving in ends as you go”. That’s not the decorative use, however. It can be used as the only way to carry the second yarn across the fabric decoratively, making patterns in the process. In this case, the reverse-stockinette side of the fabric is the right side. I haven’t tried this… yet. (You know it’s only a matter of time before I do, right?)

The second way is a little bit more like slipping with yarn in front or in back. I hold the weft (yarn to be carried) in my left hand and the knitting yarn in my right.

Here’s a swatch that show what it looks like both in yarn the same weight as the knitting yarn and in yarn that’s much thicker: 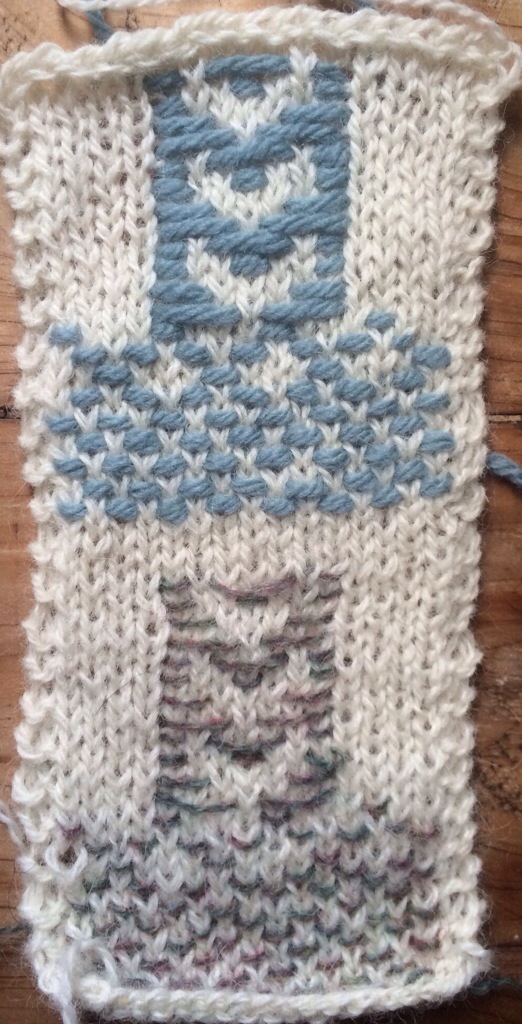 I generally prefer the thicker yarn for making patterns – as you can see, it produced a more solid effect. For something scrappy like my stole, though, thinner yarn looks just fine mixed in with the thick.

When I want the weft to show in the front, I bring it forward between two stitches as if to purl with it, but then I actually knit with the knitting yarn. When I want to hide the weft, I return it to the back of the knitting. (If I’m working the wrong side of the fabric, I reverse these maneuvers.)

There’s a little more nuance than that in the details, which I hope to illustrate below. 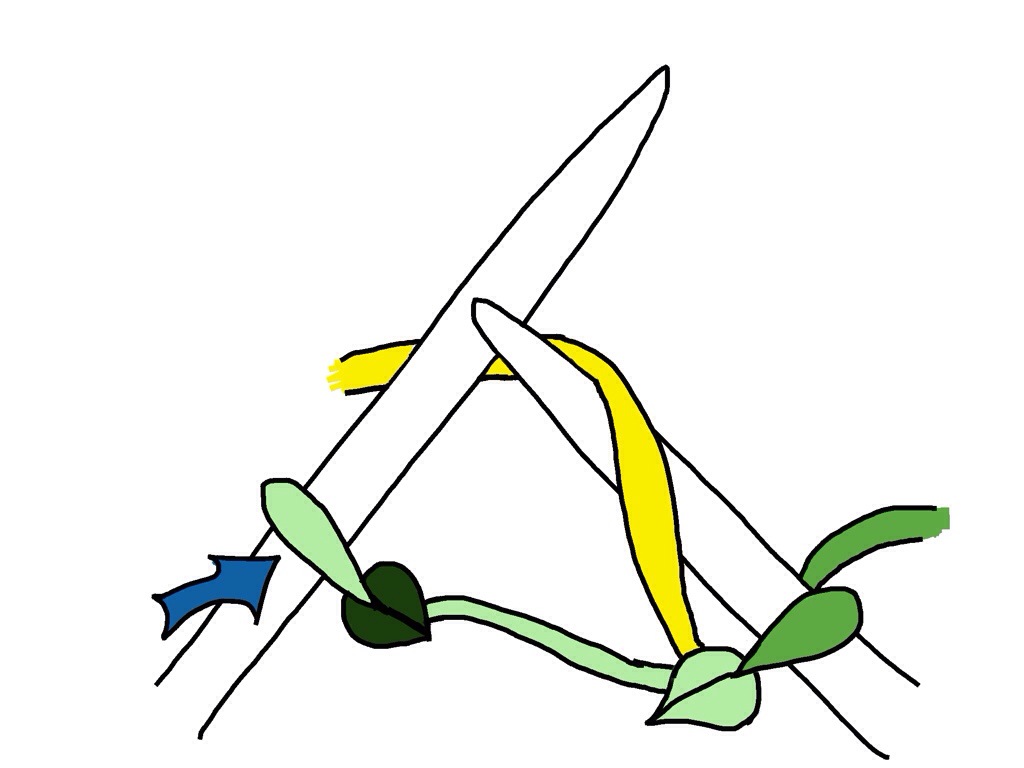 This shows the process of making the weft yarn come to the front. Reach behind the weft yarn with the active needle and then insert the needle in the next stitch to knit it. 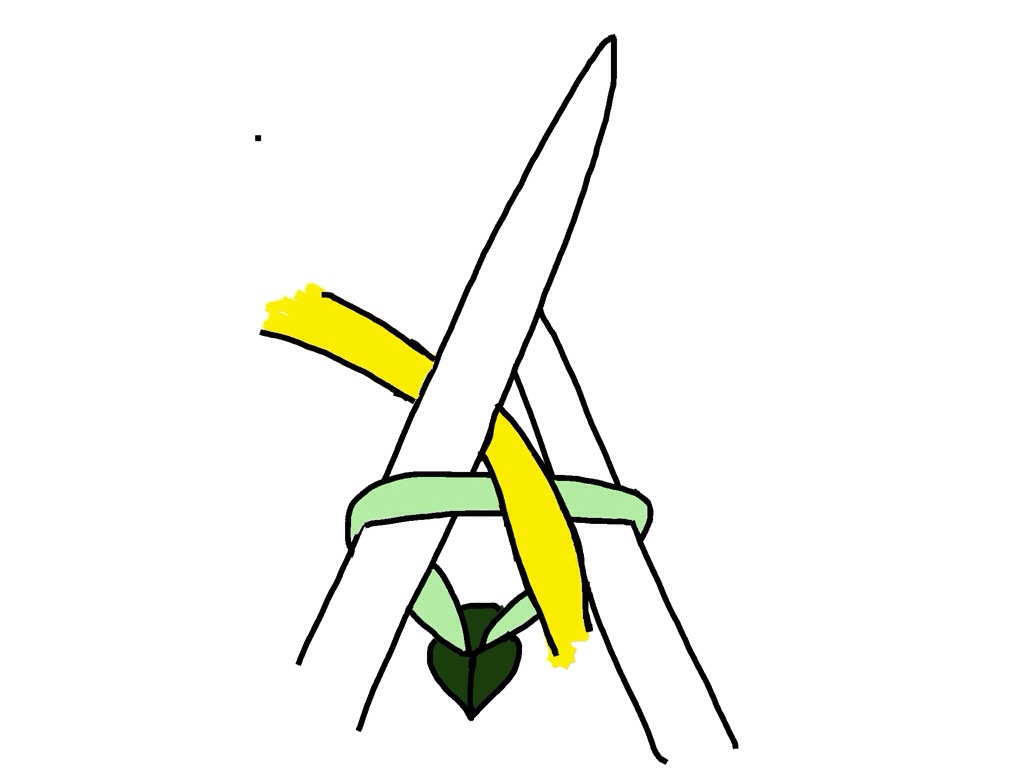 The weft yarn will pop over the stitch that will be knit. Go ahead and knit the stitch, being careful not to catch the weft yarn on your active needle. 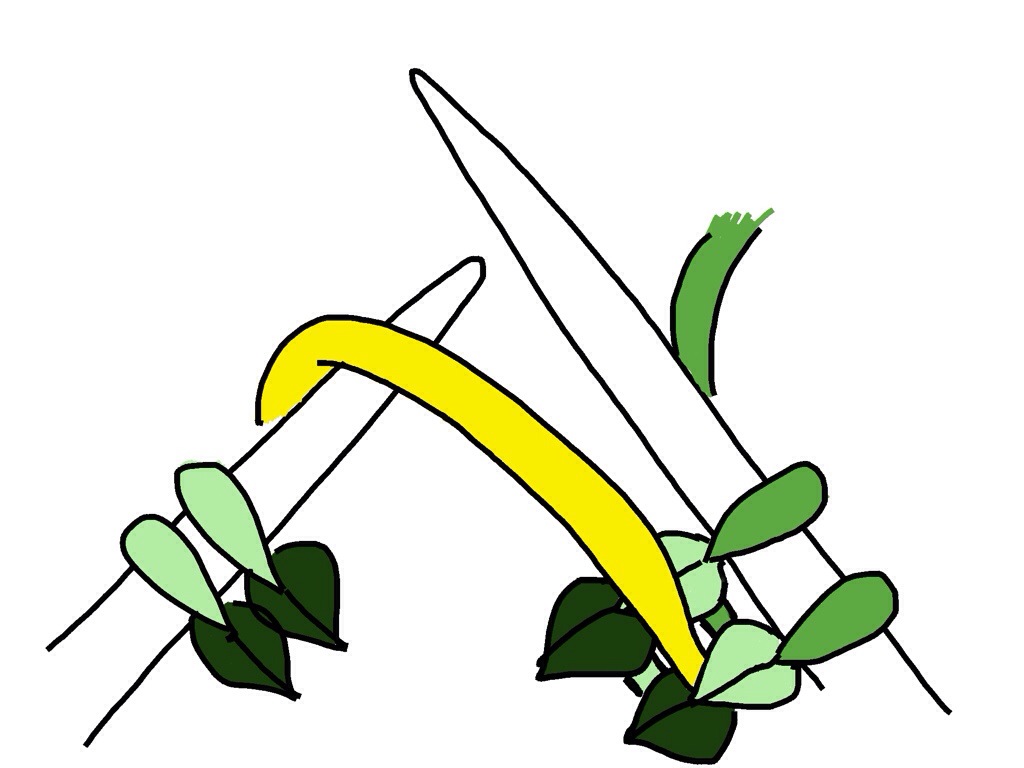 When you slide the old stitch off the inactive needle, the weft yarn should stay in front – it might rest in front of either needle. It’s easy to let the weft yarn slip between the needles to go to the back when necessary.

The process of bringing the weft yarn to the front is the same for purling.

(Continental-style knitters may need to find a different way of accomplishing the same thing.)

The weft nestles in between the purl stitches. My favorite part of the white and blue swatch is just a simple over 1-under 1 weave, with the next row starting with an under 1 instead.

Some important things to know (the method is not that hard; it’s just a little different from other knitting):
1. If you’re using a different weft yarn for each row, there will be a lot of extra ends to weave in. Consider finishing the edges with a hem or an i-cord so the ends can be stuffed inside without being fiddly.
2. The fabric will not be stretchy from side to side, so be careful not to use this when stretchiness is required. No sock cuffs!
3. Make sure to flatten out the fabric as you go so you know you’re not gathering up the cloth and making the weft too short. Don’t cut your yarn before you’re sure you’ve left enough slack in the weft.
4. The first few rows can feel unstable and wobbly; after about the third row, things will feel much better.
5. Be careful about float length; swatching with the yarns you want to use will tell you what’s appropriate. Fuzzier, stickier yarns will probably work better for longer floats than slick yarns. For the project above, I didn’t have a float length of more than three stitches, but Montse Stanley had examples of longer floats in the Knitter’s Handbook.

I’ve since learned more about this technique, including that Barbara Walker called it Swedish weaving (why, I don’t know; it doesn’t seem to be particularly Swedish), and that the major use of it in handknitting is in Estonia, where it is called Roosimine; the standard motifs from Estonia that use it are called roositud. You can see a bundle on Ravelry in which I’ve collected everything I could find on Ravelry that uses the technique: