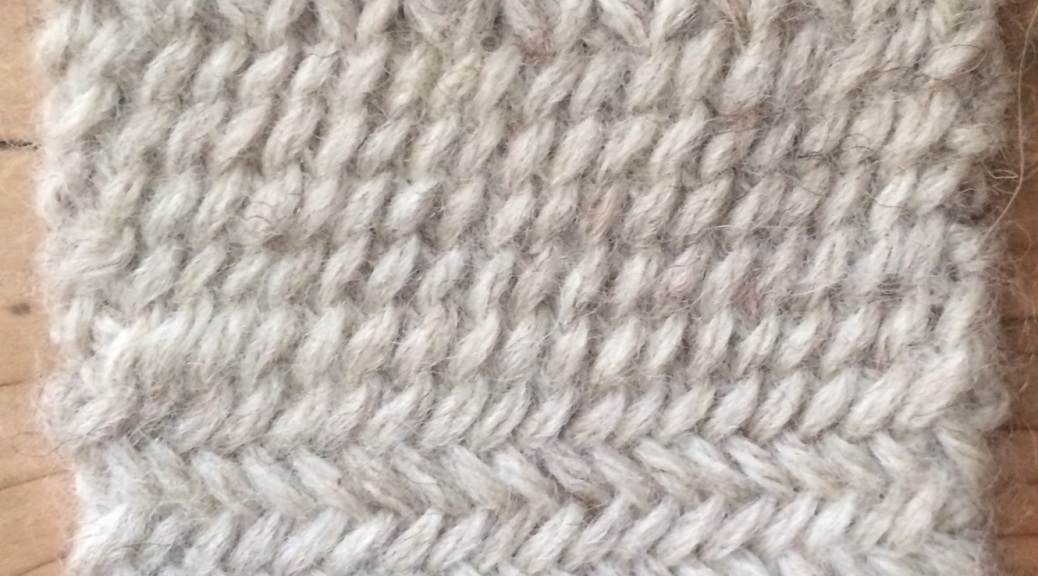 Christine Guest recently wrote a really fascinating series of blog posts about a stitch from Barbara Walker’s Second Treasury that’s not commonly used: the Miniature Herringbone stitch. I hadn’t ever really paid much attention to it, which turns out to have been a pity – it turns out to be a dense, firm knitting stitch, good for things like potholders, slippers, bags, and coat cuffs. But also, as Christine demonstrates, with the right yarn it can make lovely tailored garments. The trick is that it requires special care when it comes to all kinds of techniques. Christine’s worked out a lot of helpful tricks for short rows, buttonholes, and so on. Do go have a look at the series. 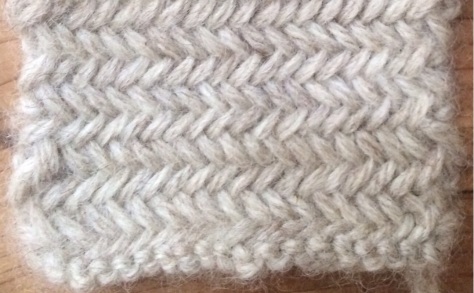 The basic technique involves knitting every stitch together with each of its neighbors, and doing the same except with left-leaning decreases on alternate rows. Barbara Walker calls for p2tog through the back loop. I generally prefer the purled equivalent to SSK – slip each of the next 2 stitches as if to knit, and then purl together. It works quite well in Miniature Herringbone, the bottom stitch in my swatchlet above. One thing I find intriguing about the herringbone in that swatch is that any shininess in the yarn is brought out. It’s not visible in the photo, but if I tilt it back and forth, it shimmers. Who ever thought that Lion Brand Fisherman’s Wool could shimmer?! I can just imagine what this might look like with a shiny silk yarn or in a longwool like Wensleydale.

Well, as ever, swatching made my mind make connections to other knitting techniques I’ve encountered. The first thing I remembered was twice-knit knitting, which I’ve looked at in Montse Stanley’s Knitter’s Handbook. I promptly went to confirm the memory, and yes, each stitch in twice-knit knitting is knit together with each of its neighbors. The difference is that all the decreases are right-leaning: straight up k2tog on one row, followed by p2tog on the next. This is the middle stripe in my swatchlet: it doesn’t shimmer, but it does look interesting. A subtle mirror could be made by making all the decreases left-leaning, of course. Montse Stanley and June Hemmons Hiatt both have a few more interesting things to say about twice-knit knitting: they both provide special cast-ons and bind-offs, and they both say that it doesn’t unravel when cut. June Hemmons Hiatt says in her Principles of Knitting that it makes good sock toes for that reason; she also provides suggestions for increases and decreases. And that’s all there is in any of my reference books about twice-knit knitting. Given that Miniature Herringbone is basically the same technique, I’m sure that their knowledge applies to it as well.

After remembering twice-knit knitting, my mind wandered to the 3-to-2 decrease I like to use. The stitch that is decreased away is knit together with each of its neighbors, in one case with a right-leaning decreases and in the other with a left-leaning one. Why not try that all the way across the fabric, I thought. And so that’s the top stripe in my swatchlet above. Each stitch is knit to its neighbor, once with a left-leaning decrease and once with a right leaning, alternating across the row. As you can see, I don’t really have a handle on how to get things lined up, so the V shapes that result meander a bit. I find the effect rather charming, actually. It would probably be possible to come up with some interesting variations using patterns in the order of the decreases. Anyway, I think this is a technique that’s well worth exploring further. I hope some of you will too.