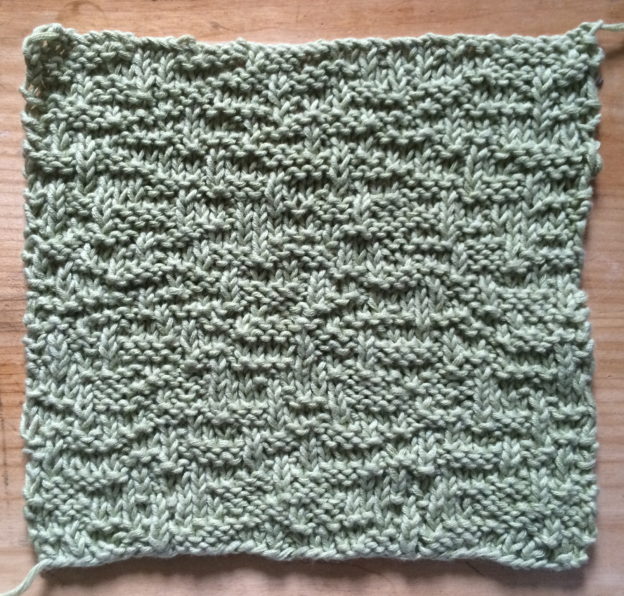 For my birthday this year, I bought myself two books I’ve been yearning for: Sequence Knitting and the KNITSONIK Stranded Colourwork Sourcebook. Both have to do, in rather different ways, with demystifying particular design processes, though sequence knitting is also a new method for knitting complicated patterns using extremely easy-to-memorize methods. I am pleased as can be with both these books. I’ve already learned a lot from both of them. I have so much to say about each of them that I can’t possibly review them both in one post.

Sequence knitting involves taking a short sequence of stitches, for instance (k5, p3), and then working it repeatedly over a multiple of stitches that isn’t necessarily evenly divided by the stitch pattern. At the end of the row or round, the next row or round is begun where the sequence left off.

The principle is very simple, but there is so much more to this book than that – sometimes an apparently simple idea has multiple complex layers behind it. Every time I look at the book, I learn something new about the structure or possibilities of the method. There is in-depth discussion of different categories of pattern. There are over 190 predefined stitch patterns in the stitch dictionary, along with 47 patterns for finished objects (Ravelry link). Campochiaro also discusses the use of color. And finally, there’s the math. The math-phobic need not fear – the method is designed so that you don’t have to do math to knit something beautiful, and in fact one can knit something as complex-looking as Woolston (Ravelry link) merely by keeping track of a short, nine stitch sequence and casting on the correct number of stitches. But if you do love math, there’s far more here for you than in many other knitting books. Campochiaro has a background in science, and so she has included a lot of discussion of mathematics, including a section in the appendix where she works through a formula for calculating the number of patterns that exist for a sequence of a given length.

This book is limited to patterns worked in knit and purl, and sometimes in more than one color, but this limitation helps with understanding the method. Campochiaro explains how the method could be used with other types of stitch patterns as well.

Finally, a short review of the book as a book: it’s beautifully and artistically laid out, clearly written, and with a number of features that this trained librarian approves of: a good bibliography, a beautiful hardback binding, excellent illustrations, charts, and photographs that add clarity to the text, useful appendices, and the best index I’ve seen in a new book in a very long time. (It has “see” references! It has “see also” references!) This book is more than worth the $60 price.

Recommended for: knitters who are already comfortable with the basics of knitting, who want something easy to knit on the bus or while talking to friends but are tired of plain knitting, who want to see more knitting books with math, or who want to start improvising their own stitch patterns within an easy framework. Highly recommended for libraries with patrons who knit, though I don’t know that the book is available through the usual library distributors.

So that’s the review. Here’s an application of the method. When I first heard of this book, I wondered if it would combine well with my secret code stuff. The answer is a hearty yes, though I’m still comprehending the implications. I’ve also acquired some useful vocabulary that will allow me to explain some of my techniques more clearly. (There was one method I’d been hesitant to describe because the only term I could think of for it was boustrophedon, which is too esoteric. Serpentine is much more self-descriptive.)

The first thing, as usual, is to turn a word into numbers. For my initial sample, I decided to go with a very short word with all its letters at the beginning of the alphabet for a pragmatic reason: it makes the numbers smaller and easier to count while knitting. Therefore I encoded ace: 1, 3, 5. (Note that I’m skipping the initial zeros I often use; for this method there’s no ambiguity in leaving them out.)

If I knit this as a knit/purl sequence, I actually need to count it twice so as to get an even number of stitches to account for the alternation of knit and purl. The sequence therefore becomes (k1, p3, k5, p1, k3, p5), or a multiple of 18 stitches, though really all I need to remember to knit this is 1, 3, 5, alternated between knit and purl. I decided to knit a washcloth, and cast on a multiple of 18+5. I took it to two noisy group situations and had no trouble knitting it with kids running around and multiple threads of grownup conversation. Here is the result: 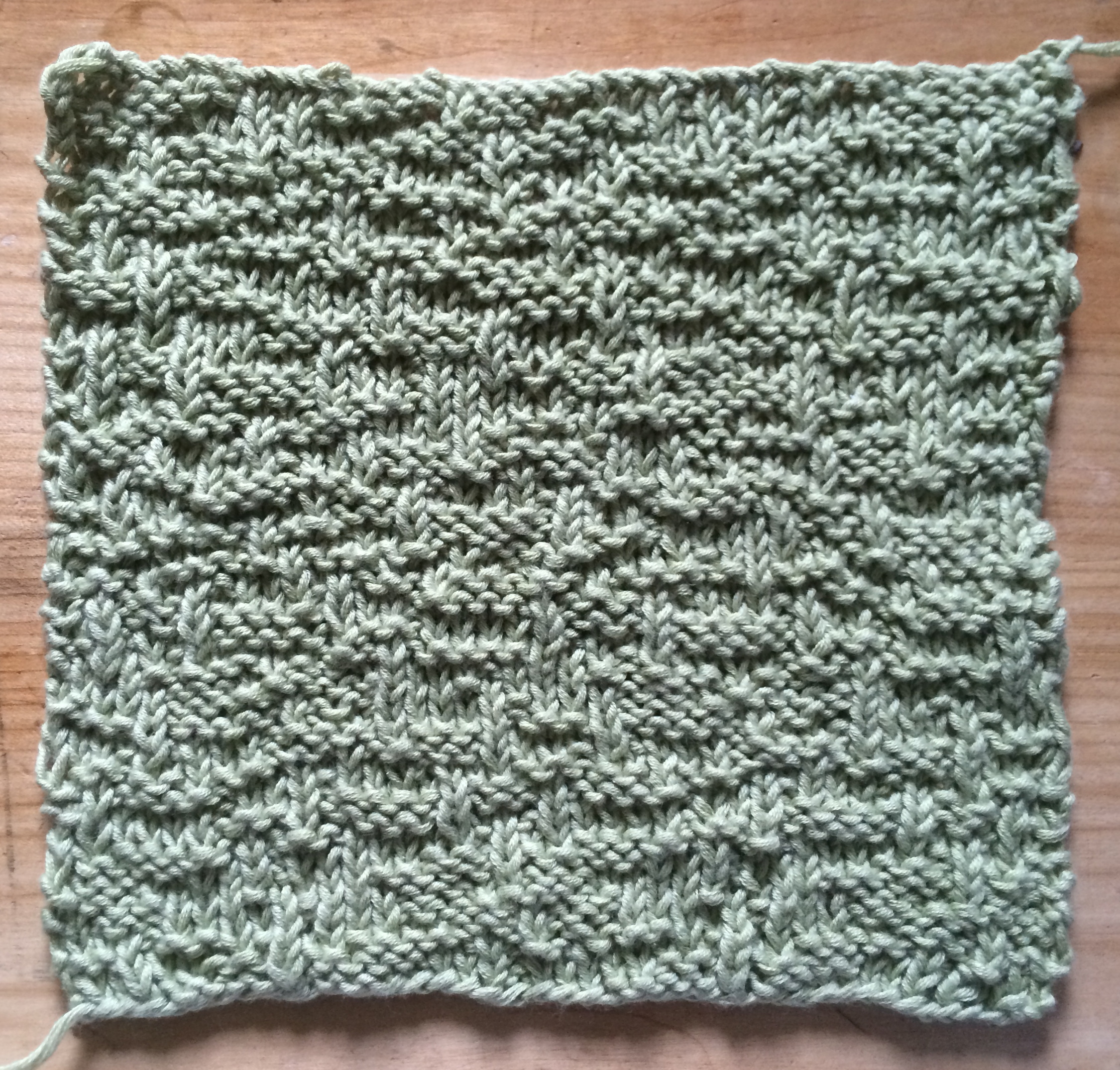 I think I might have done better to pick a different number of stitches to cast on, but given the arbitrariness of my decision (I cast on 41 stitches merely because I noticed when I was working retail that 41¢ in US currency uses one of each of the most common coins), I don’t think it’s a bad result.

While I was knitting it, I also became temporarily obsessed with charting out the possibilities for knitting this sequence flat – the layout method is described as being serpentine because it winds back and forth. I’m not going to include all of them here, in part because several of them turn out to be the same design, translated or rotated, and in part because that would just take up a lot of space. But here are some of them; click on any of them to enlarge. I’ve shown them as black and white, though the black squares represent what looks like a purl stitch from the front. (Of course the black stitches that are worked on even-numbered rows are actually knit, not purled.) The stitch pattern repeat is outlined in red. 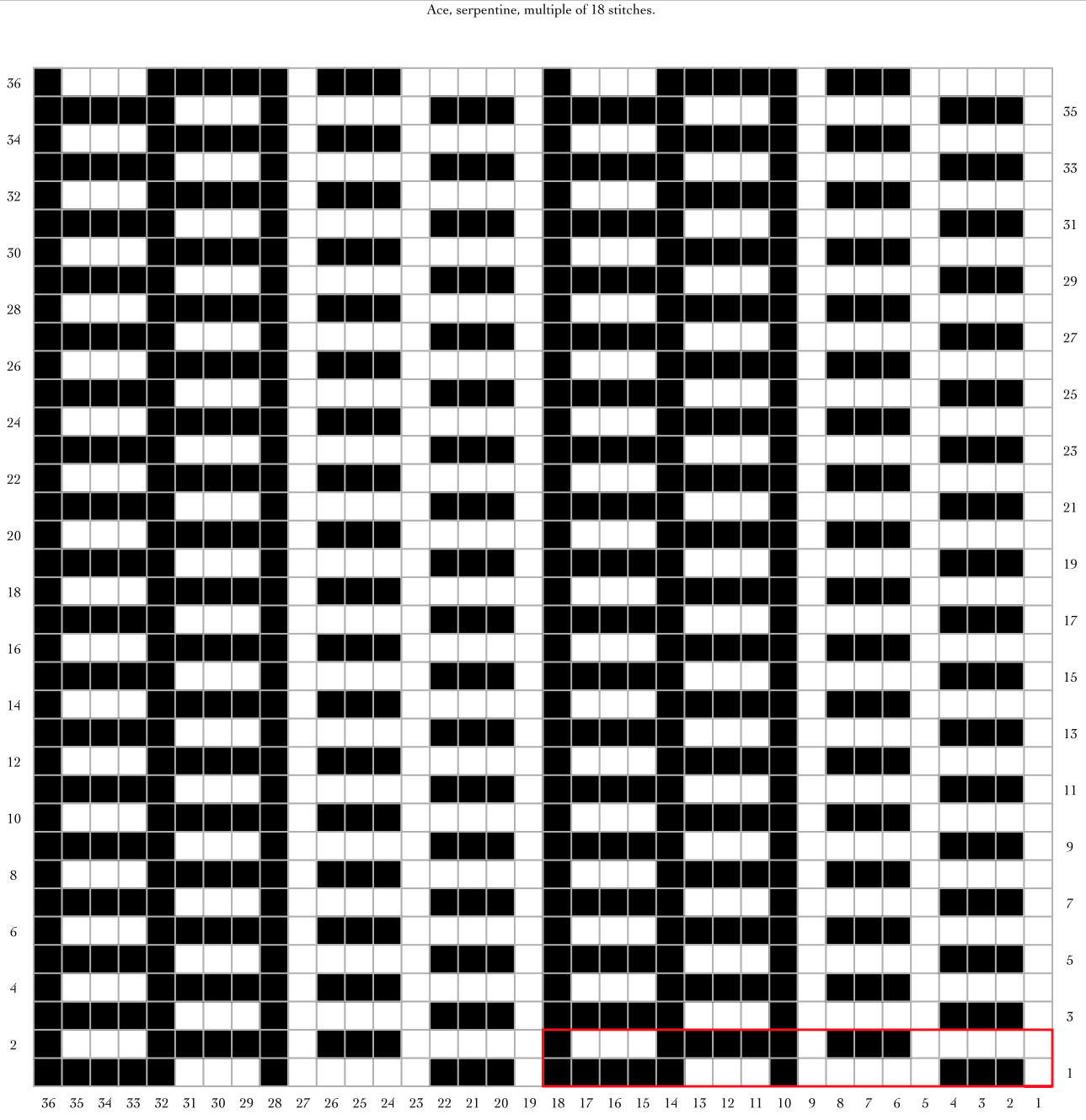 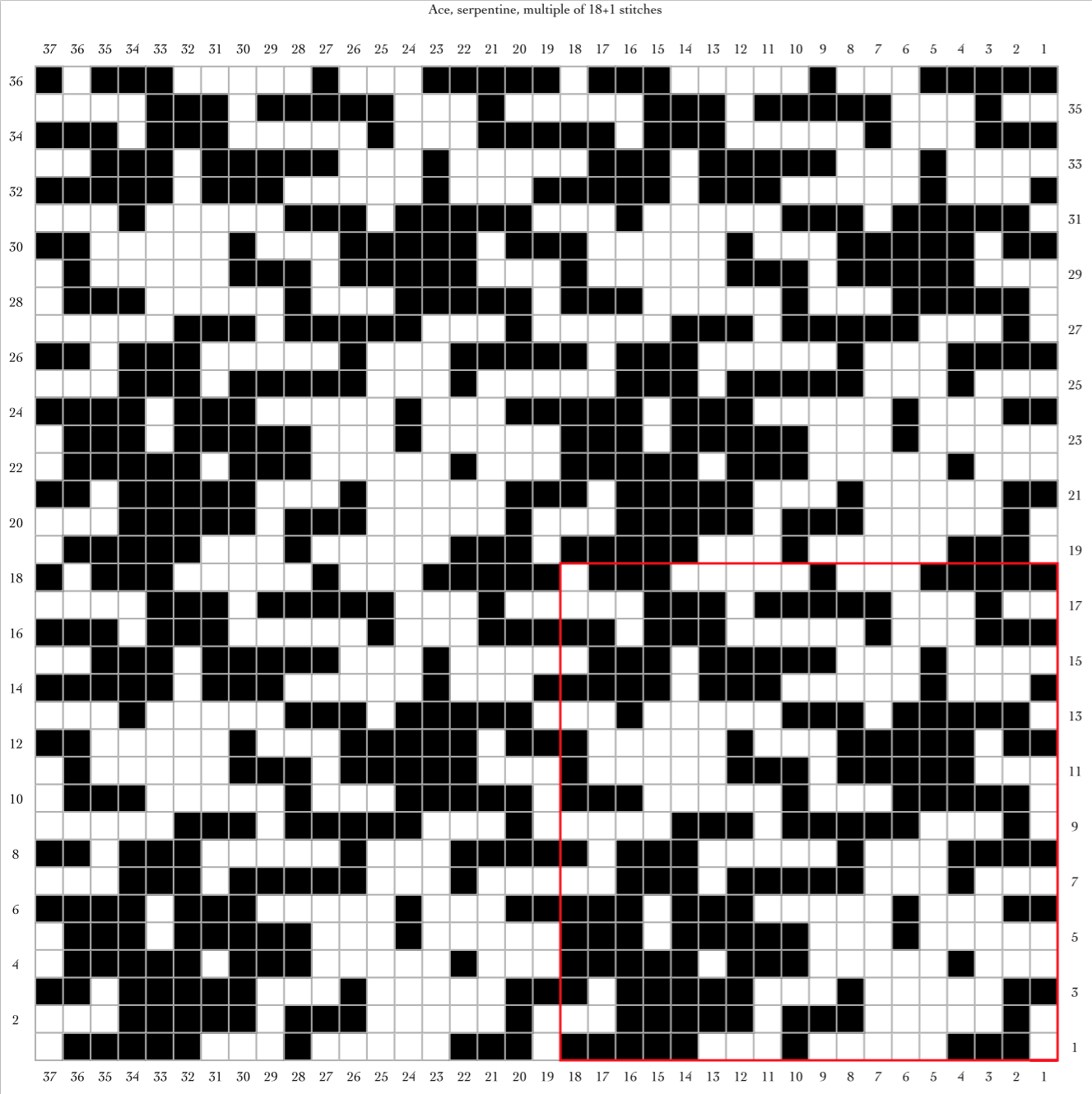 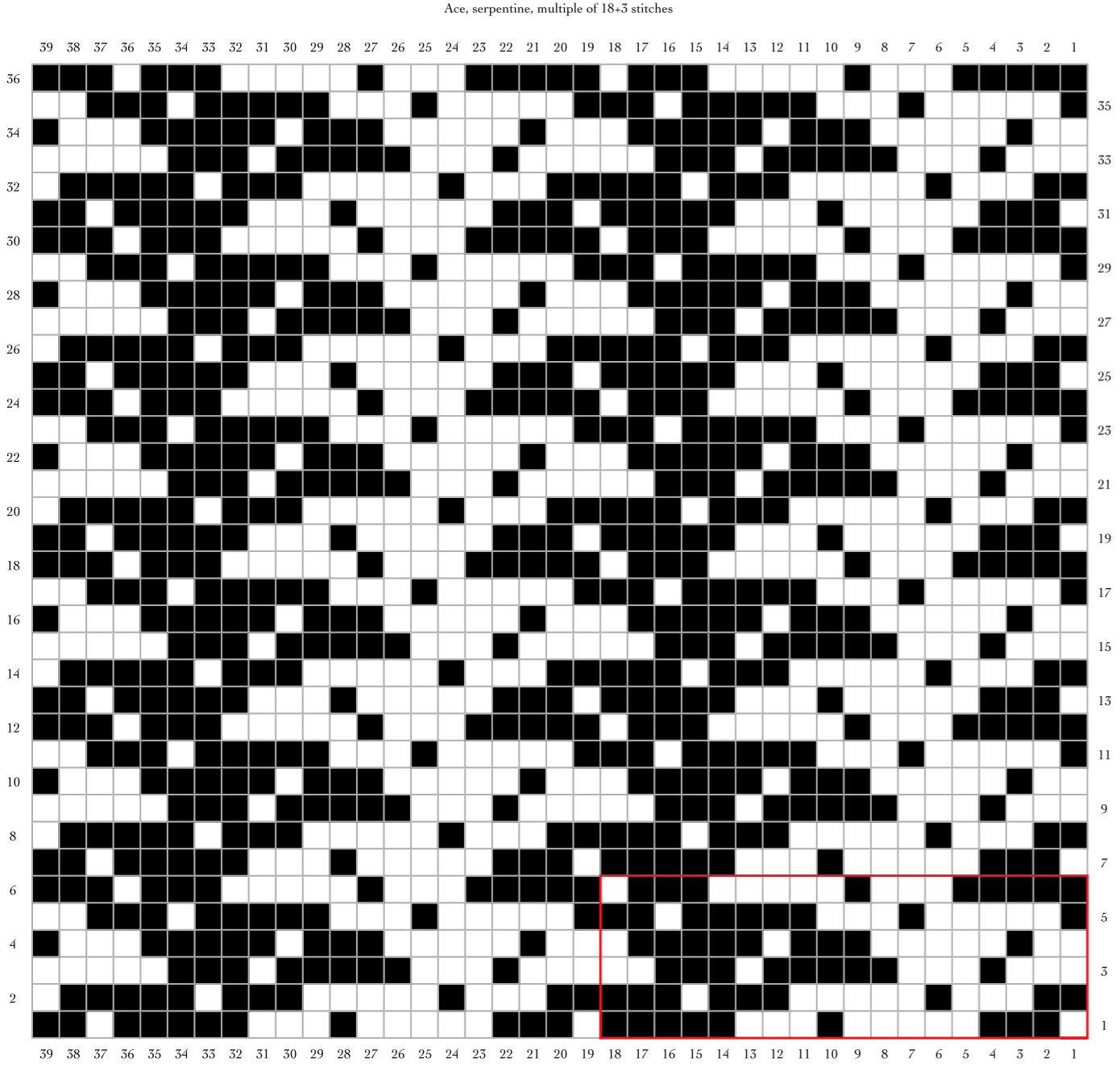 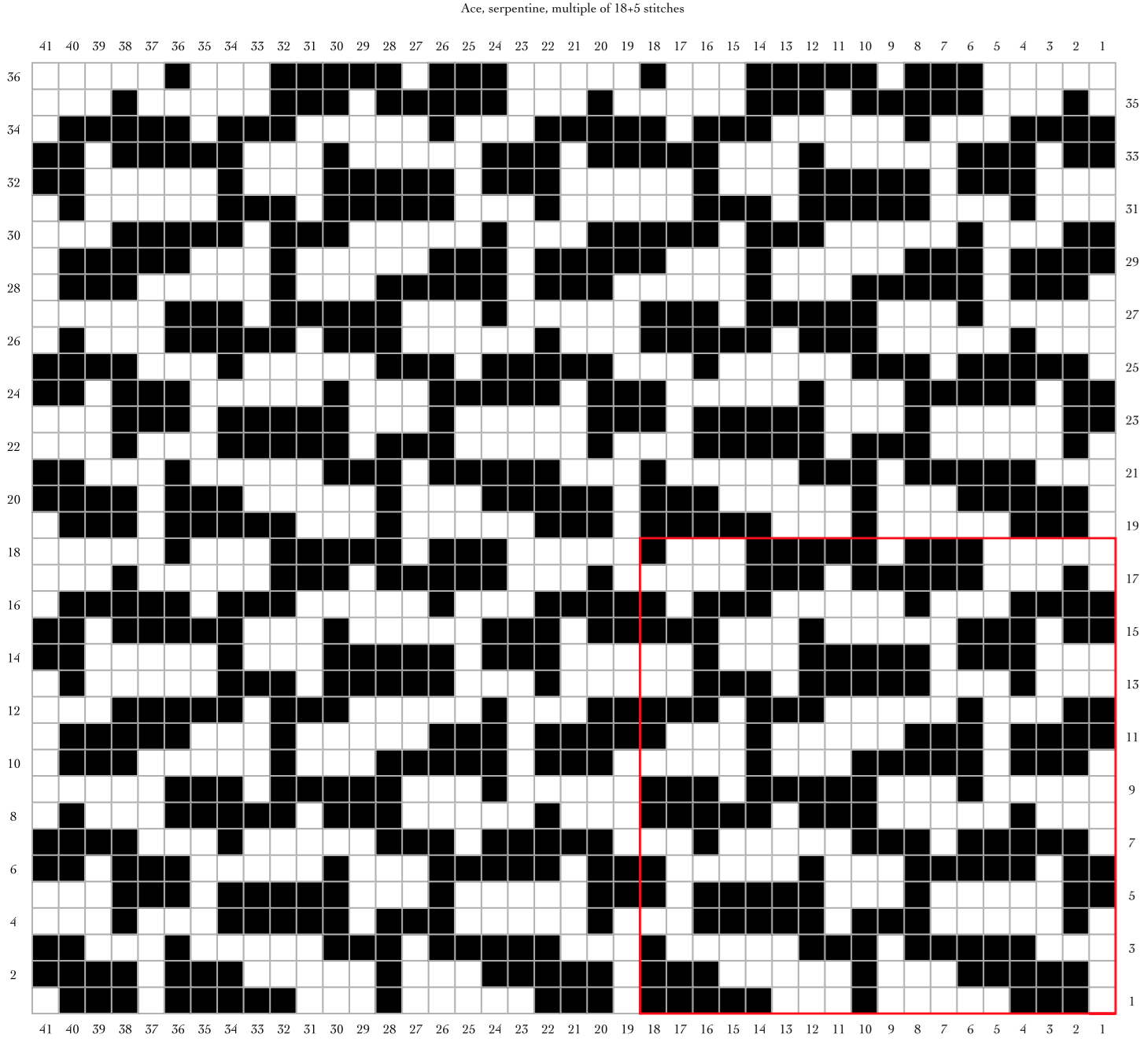 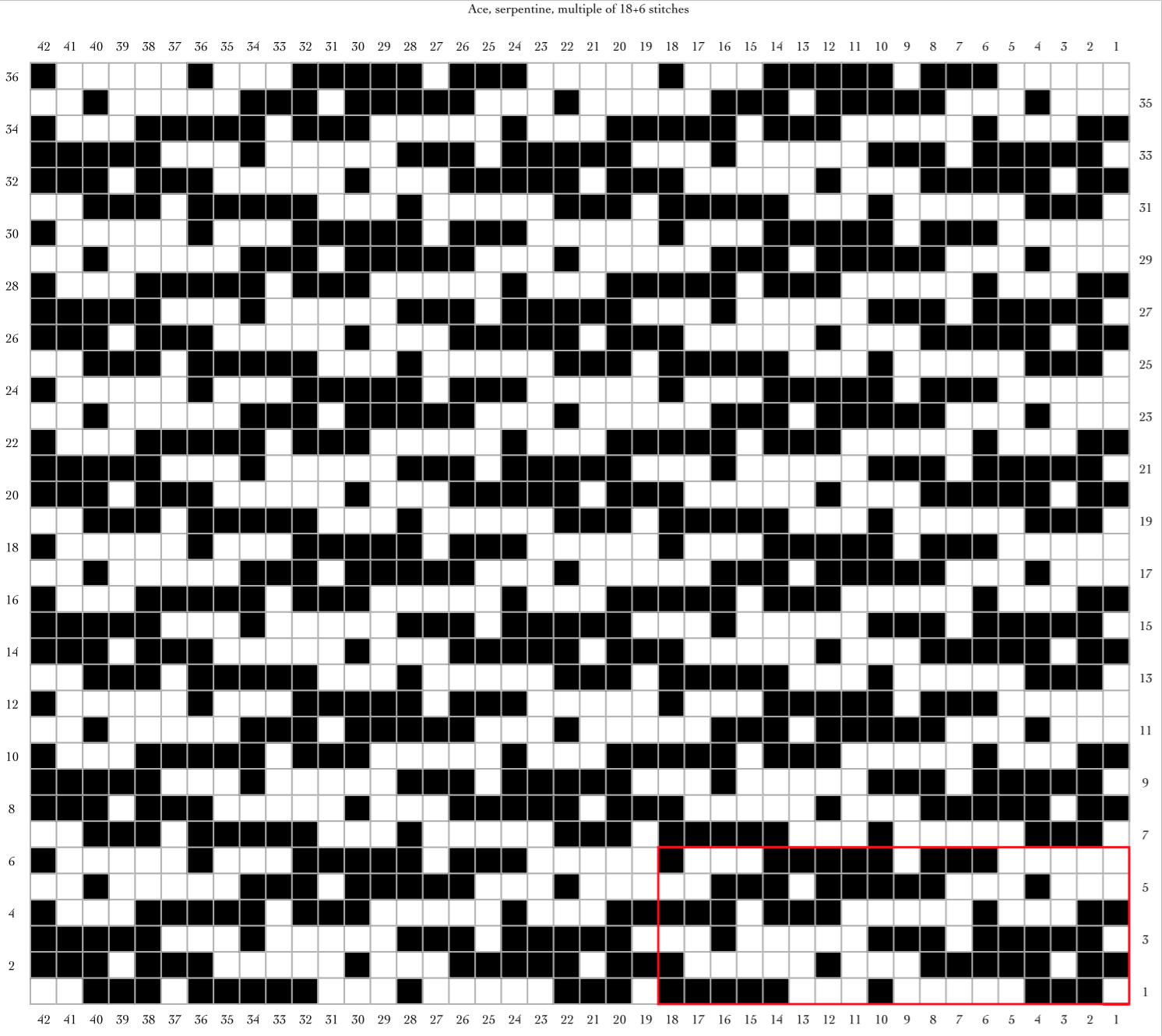 Several of these spark my interest quite a bit, particular the 18+3 sequence, though I also have enough experience with knit/purl textures to know that some of the odder-looking ones might look better after being knit up.

The layouts do point out a feature of sequence knitting that not everyone will like: sometimes the obvious visual patterns won’t repeat evenly across the fabric. Of course, given the chart, I could center the pattern repeat, though that removes the advantage of only needing to memorize a short sequence. It’s worth playing with, though. Variations can be tried for the fun of it – that’s how we learn. (I already have a variant of one of those charts set aside to try to tweak into reversible lace.)

There is also quite an interesting interview of Cecelia Campochiaro on Tom of Holland’s blog.