I’ve talked about hexagonal mesh before, but I don’t think I mentioned that there’s more than one kind. The one I generally use is my favorite for most purposes: the stitch count doesn’t change from row to row, it doesn’t curl much, and it seems to have the most equally-proportioned hexagons. Also, it’s got decreases that face in both directions. The one minor flaw it has is that horizontal bar of yarn across the bottom point. I decided I might really be a little too biased (though the mesh isn’t), and so I should at least swatch some others, make variations along the way, and see what I might like to use at some point.

So here is my long swatch.

With one exception, I’m not going to chart any of the meshes in this blog post, but comment if you’d like to know more about any of the others, and I’ll post instructions another time. I have linked to instructions elsewhere online, where available. 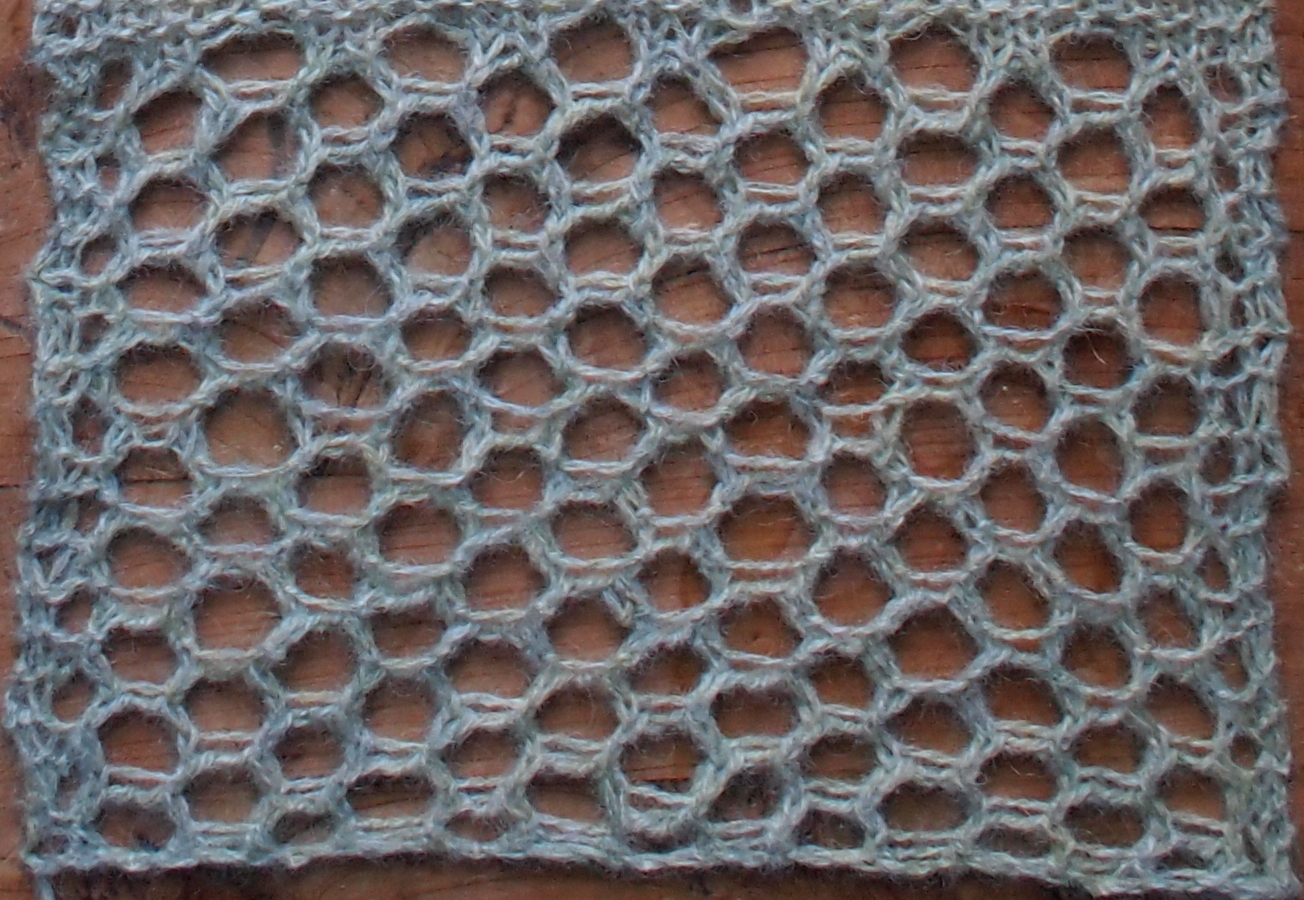 1-4 are variations on my favorite. I tried working it as garter lace, and also so that all the decreases were k2tog with no left-leaning decreases. It all works well enough, but the original is still my favorite, for reasons that might be hard to see here; I’m having technical difficulties with photography today.

5 is a traditional Shetland mesh. It’s smooth, it’s properly hexagonal, and it doesn’t have the horizontal bar of yarn cutting off one corner. On the other hand, the lines making the hexagons are wider. The increases are worked on one row and the decreases on the next, and so the stitch count varies from row to row, which also makes it harder to chart. Also, all the decreases are right-leaning in the traditional version, which annoys the mirror-symmetry-lover in me, even though it’s not hugely visible from a distance. Note: this can be changed, either by working ssp as well as p2tog on the wrong side rows, or by  working the YOs on the wrong side, and the decreases on the right side.

Number 6 makes the decreases mirror each other.  I do like this mesh a lot, and could definitely see using it in a design.

Number 7 is Perforated Stitch, from my Mon Tricot stitch dictionary. (I do love this book. Used copies are not hard to come by online. The terminology is a bit different, but if you read the introduction, it’s not so bad. It has no charts. It has some nice crochet in the back, too – British terminology.) It’s like my favorite honeycomb, except that the decreases go the opposite directions.  Not one I’ll use, I think.

Number 8 is Cellular Stitch (Instructions), from Barbara Walker’s second Treasury. It’s denser and less clearly a honeycomb. But it is nice, and also it’s a multiple of three stitches instead of four – good for certain contexts. (A lot of crescent shawls, for instance.)

Number 9 is something I made up; it uses that 3-to-2 decrease that I’m fond of in certain circumstances. It’s definitely made of hexagonal shapes. It’s has smaller holes. I like it. It’s also a multiple of three stitches instead of four. Here are the instructions, since I’m reasonably certain it’s brand new.

Number 10 is German Honeycomb (instructions), also from Barbara Walker’s second Treasury. This one is very interesting—each half of it is worked over three rows, so some of the pattern rows are wrong side rows. That notwithstanding, it’s not truly difficult—it’s actually probably a good way to practice either ssp or p2tog through the back loop. I like the vertical elongation of it. However, it’s less hexagonal in nature than some of the other meshes on this page.

Number 11  is Cane Stitch (instructions), from Barbara Walker’s first Treasury of Knitting Patterns. It has giant holes, doesn’t have mirror symmetry, and isn’t really hexagonal in nature either. This is a repeat of three stitches and three rows, which makes it completely reversible.

Number 12 is an odd little mesh, made by working number 9 without any of its wrong side rows. It makes interesting staggered square cells, but it’s very fiddly indeed. Not recommended. Also: not hexagonal.

So there you have it.

I think this sort of thing is a useful sort of exercise to conduct occasionally. It lets me compare some superficially similar stitch patterns and learn from them. Sometimes it makes me realize that I like a stitch better than the photo in the stitch dictionary would have suggested.

2 thoughts on “Étude no. 16: an exploration of hexagonal meshes”