I have pretty much given up trying to invent a form of knitted filet lace, where filet lace is defined as a background of square mesh with filled in squares to make pictures or other designs. Besides, Jackie E-S has already done it (though I won’t reveal her method since it’s a paid tutorial).

The closest I’ve come up with is a variant with hexagonal mesh, which I really like quite a lot, except that the number of stitches used for one hexagon makes it harder to make detailed pictures the way one can with filet crochet or filet lace (done on netting) because of the scale involved.

I was considering the question of lace picture knitting some more and realized that my mental thought processes had gotten stuck on a particular design order. When I think about making filet crochet or hex lace, I start with the mesh chart and then mark the design on the mesh. But what if I reversed the order? I don’t know how other people do this kind of design work, but this is how my mind works. (A modern designer that I know of who does this sort of work—and is expert at it, unlike me—was Sharon Winsauer — Creat2Thrive link.)

I outlined a shape on graph paper (right side rows only) with the knowledge that it wouldn’t have the exact shape when knit, because knit stitches aren’t square. If I wanted to make a picture, I would need to use knitter’s graph paper to get something closer to the right shape.

There’s a blue diamond where I plan to knit plain stockinette. Then I settled on a mesh background to use – Star Rib Mesh from Barbara Walker’s first treasury. Because of the alternating columns of yarnovers and not-yarnovers, I decided I needed to stick an extra column up the center of the diamond, which turned out to be a good hunch. These columns are also why my diamond zigs and zags over two squares each direction. The mesh smooths this out more than I expected!

Then I filled in the space around the diamond with mesh, replacing some of the double decreases with single decreases instead. 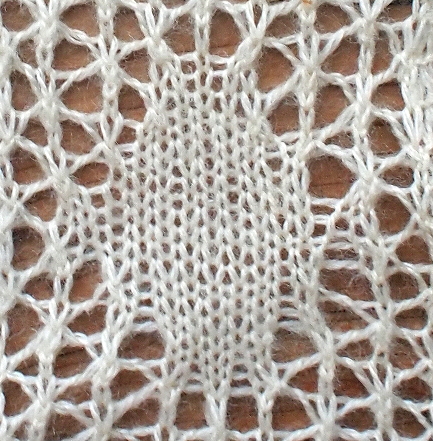 Knitting the first half made me pretty happy, aside from the way the YOs spread apart, so I made a note to try knitting those through the back loop to twist them on the second try.

Unfortunately,  I forgot something pretty fundamental about knitting: for stockinette, stitches aren’t mirrored along the horizontal axis, so there’s no way to make a stockinette and lace pattern look perfectly symmetrical from top to bottom – the decreases and increases will push the stitches around in different ways. 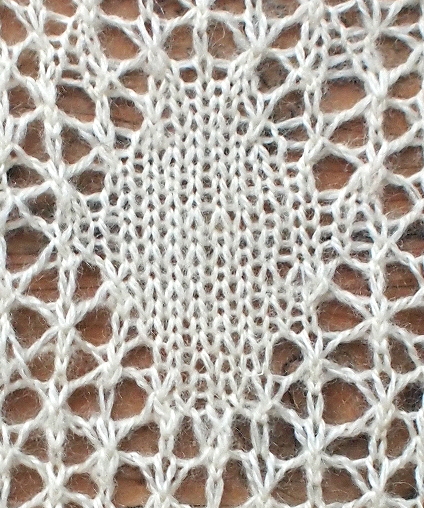 I still decided to try it with knitting through the back loop to see if that helped any. I did like it a little better, but I’m still not satisfied. In particular, I don’t care for the way the stitches on the edge of the shape pull away from the others in the middle four rows.

Things to try: outlining the stockinette portions with cables or decrease lines? Making the stockinette shape something where the top edge isn’t supposed to mirror the bottom? Anyway, I’m not completely stuck yet, but I’ll explore the possibilities another time.

This kind of playing around with stitches isn’t always productive, and it’s sometimes a little disappointing to have what seemed a brilliant idea turn out to be not quite what I expected. Still, I’ve learned something, and that’s always good.