The other day I was attempting to design a stitch pattern using lace faggoting as a background mesh. (I could wish for a different  name for this class of lace stitch, but there it is. Here is more information about the term.)  Faggoting, when worked alone, is all yarnovers and all decreases, all the time, on both sides of the knitting. I’d worked a practice swatch in one yarn, and then started another, only to be perplexed by how different the mesh looked.

On further examination, I realized that I had accidentally switched which faggoting stitch I was using.

Barbara Walker lists three in her first Treasury, and accounts for the difference by speculating that it’s caused by the possibly longer yarnovers in Turkish Stitch, because the decrease in Turkish stitch is purled. This turns out to be incorrect, as I will show below. The slightly different structure is actually responsible. There are four possible permutations, and two structures.

In some ways it’s easiest to see that there is a difference in structure in the unblocked version of all four stitches, shown on the left here, because it’s possible to see how stitches 1 & 3 (counting from the bottom) collapse from side to side, while 2 & 4 stay resolutely open. It’s still possible to see a difference in the blocked version, however, particularly in the shape of the vertical decrease lines. Click to enlarge any of the images in this post.

Each of these stitch patterns requires a cast on of an even number of stitches.  Work the same row on both sides of the fabric; there are no plain rows of knitting or purling. I’ve worked a single garter ridge between each stitch.

My first action upon realizing there’s a structural difference was to break out two colors of the same kind of yarn, in this case a combination of colors that I would ordinarily not use. The contrast made it easier for me to see what was happening as I went. I hope it doesn’t bother your eyes the way it does mine!

The swatch on the left shows Turkish Stitch (#1 in the list above) at the bottom and Purse Stitch (#2) at the top, with a garter ridge in the middle. The swatch on the right shows Basic Faggoting at the bottom (#4) and the obvious other permutation (#3) that I doubt anyone uses because it’s the most awkward (at least with a Western stitch mount). Click to enlarge either swatch.

Working these stitches let me see that  stitches 1 & 3 let the yarnovers go untrapped, so that they flex more and can move in various directions. On the other hand, in stitches 2 & 4, the horizontal arms of the stitch grab the yarnover from the previous row and trap them against the stitch that is decreased with the yarnover. Here is an illustration. 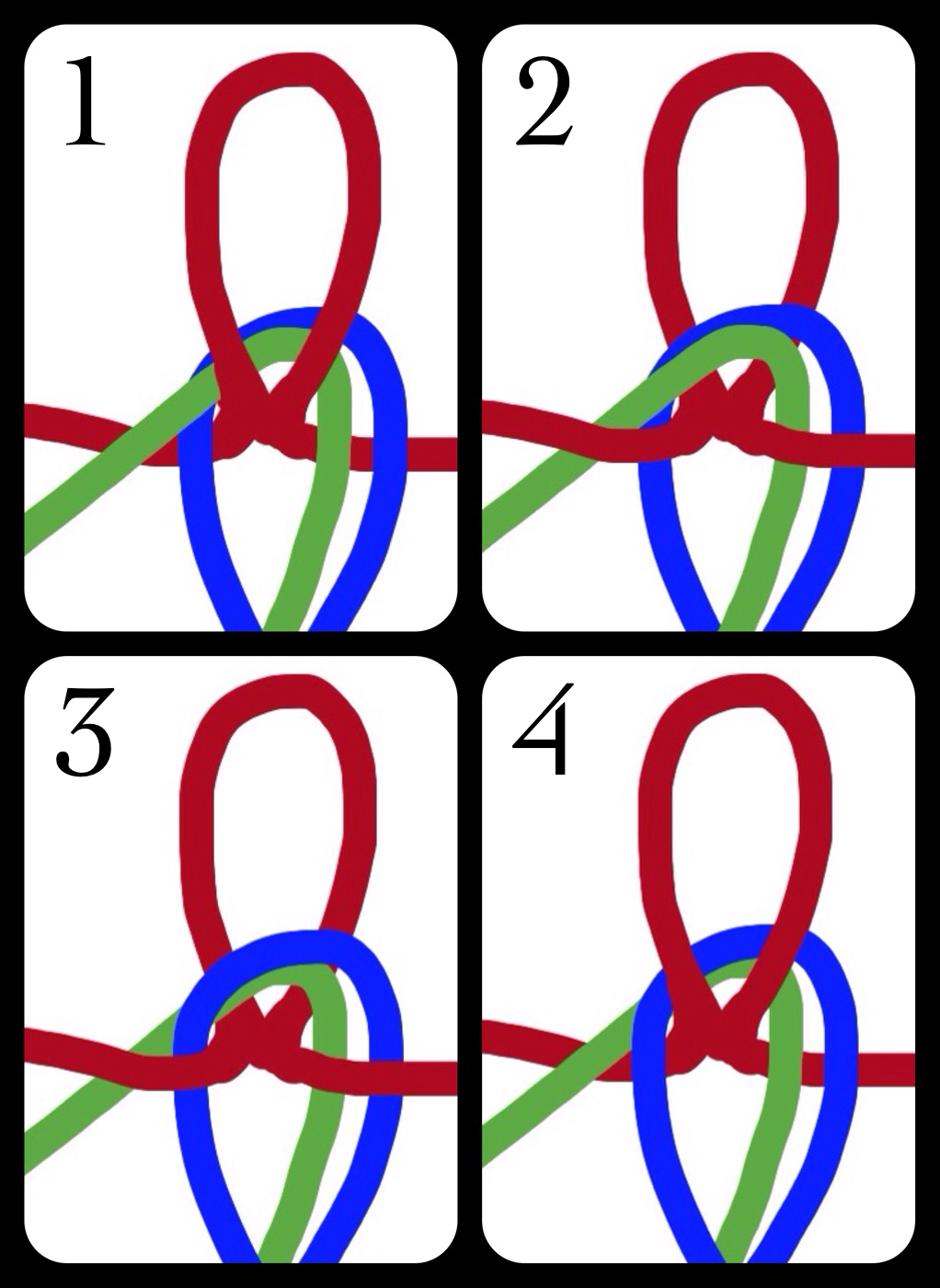 The red stitch has two horizontal arms. When the red stitch is knit, those arms are on the far side of the knitting (stitches 1 & 4); when purled, the arms are on the near side of the knitting (2 & 3).  In the cases where the green yarnover is not between the red stitch’s arms and the blue stitch, then the yarnover is free to fold up and wiggle around, as in Turkish Stitch (1) and the unnamed stitch (3). In the cases where the green yarnover is between the red arms and the blue stitch it’s being decreased with, then it is trapped and kept in a particular position, as in Purse Stitch (2) and Basic Faggoting Stitch (4).

There are probably ideal uses for each of these stitches, but I suspect that Purse Stitch (2) and Basic Faggoting Stitch (4) would hold a hard blocking more reliably.

In conclusion:  there are two kinds of lace faggoting, with two permutations for each one. Mistakes sometimes prompt closer examination of the simplest of stitches. Even Barbara Walker made unwarranted assumptions about knitting sometimes (even if this is a rather minor mistake). It’s good brain exercise and good fun to look at the structure of knitting stitches.

Most importantly: go forth and make things!