This month, the random number generator chose the word rest, suggested by Alisa on Patreon. I tried to make the lace below as restful to knit as possible. There might be double yarnovers, but all the decreases are single. I’ve included a panel version and an offset version; they combine nicely. 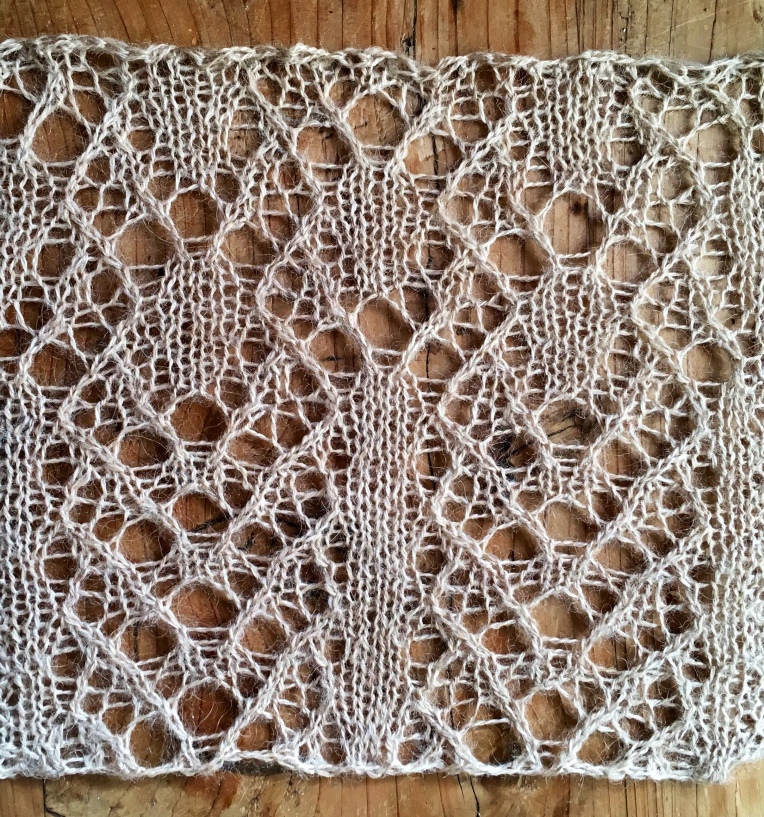 The first thing I did was to turn the letters of rest into numbers, using base 8: 22 05 23 24. I picked base 8 because it was one of the options that encoded this word with the fewest zeroes.

Then I laid out the numbers on a grid, like this:

Here’s how I do that. Each letter of rest is two digits. I’m going to use each of those digits to count squares from right to left. After counting enough squares for each digit, I’ll mark the next square to the left (though I’ll have to account for line breaks).

I kept going in this manner until I’d finished the last digit. there are four squares left over in this grid, but they don’t matter for the code, because there’s no marked square after them; the last marked square shows where the code ends.

Once I made the grid, I mirrored it horizontally for aesthetic reasons, and then I turned all the black squares into YOs and figured out where to place the decreases.

If you like what you see here, please consider helping support my work. If you would like to donate monthly on Patreon, you may help suggest words for me to encode:

If you'd like to make a one time donation, please send me a tip through Paypal.

Thank you very much! Save