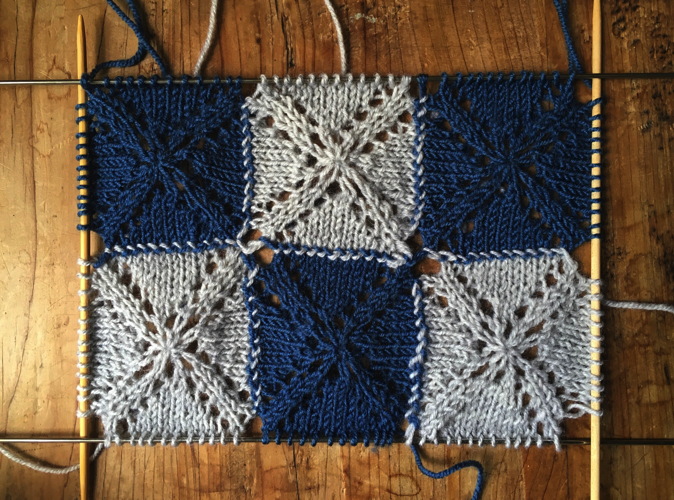 Last week I shared the beginning of my experiment in joining motifs with Russian grafting. My conclusion? That after steam blocking, it looks a hundred times better than I was afraid it would, but that I’m still not entirely certain that I would actually use it for a finished object, at least as I’ve done it here.

Regardless, I consider the experiment a success, because now I know what things look like. I have learned something, and that’s to be desired. 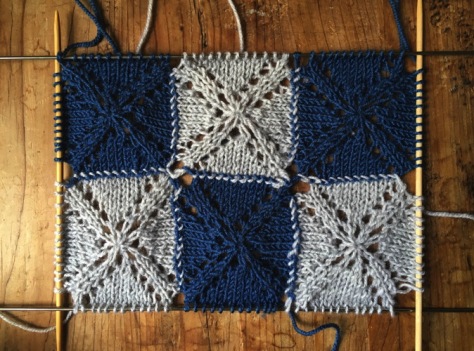 I’m not entirely sold on the way the corners look, though that might just be a matter of taste. (I also suspect I’d like that part better if all the squares were the same color.)

More importantly, the process is made somewhat awkward by requiring lots of knitting needles during the process to hold all the live stitches. This might improve with practice, but I am not entirely certain.

These two problems could maybe be solved by using the picot bind-off that Christine Guest has been experimenting with. No live stitches, but lots of nice loops, and it looks as if the corners might join up more snugly.

A final note. Because each initial seam has a live stitch at one end, I had assumed that there would be two different kinds of corner joins, so I alternated the directions I worked within a row, as shown on the left in the diagram. After looking at my final swatch, this turns out to be an unnecessary complication – both kinds of corners end up looking the same. Thus, it’s easier to have all the joins within a row face the same direction, and that makes it much easier to line things up across the row for the final joins.

One thought on “Experiment conclusion: Russian grafting for joining motifs”