The other week, I posted a needlework chart I called doodle, because I’d doodled on graph paper. I did in fact have some particular things in mind when I made the doodle; I wanted a design that I could turn into various kinds of knitting stitches to demonstrate how that works.

A key thing when I’m playing with stitch patterns is that I’m rarely concerned with making the variations look like the original chart. I’m more interested in seeing how the original chart is transformed by the process.

This variation is mosaic knitting. The nice thing about mosaic knitting is that the charts are similar to the final appearance of the knitting, so I’m not going to provide a swatch this time. Mosaic knitting looks difficult, but it’s really easy to do! Basically, knit two-row stripes, and slip stitches from the row below to make the contrasting pattern. If you can knit stripes, you can knit mosaic patterns.

Here’s a post I wrote about how this works. 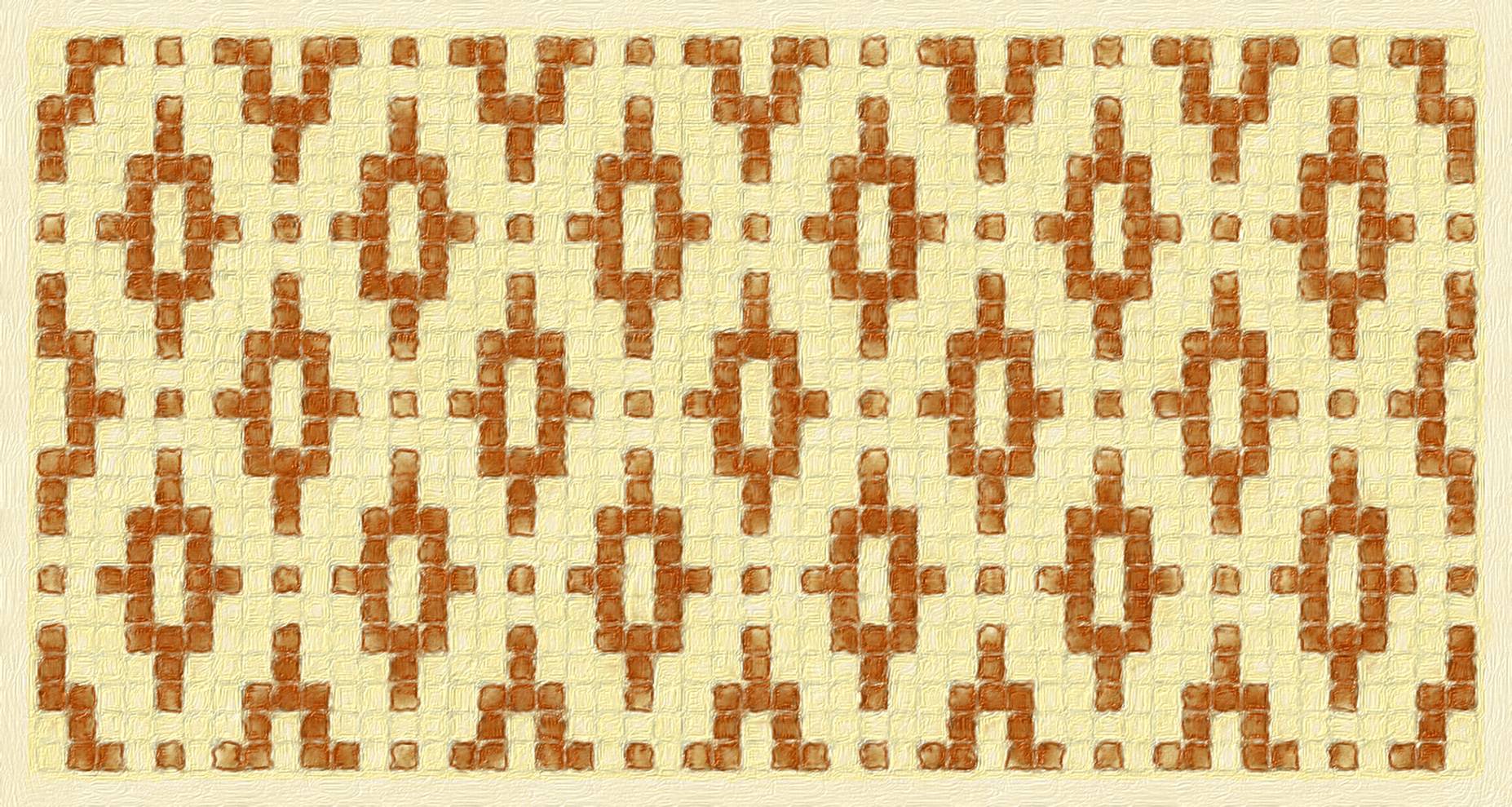 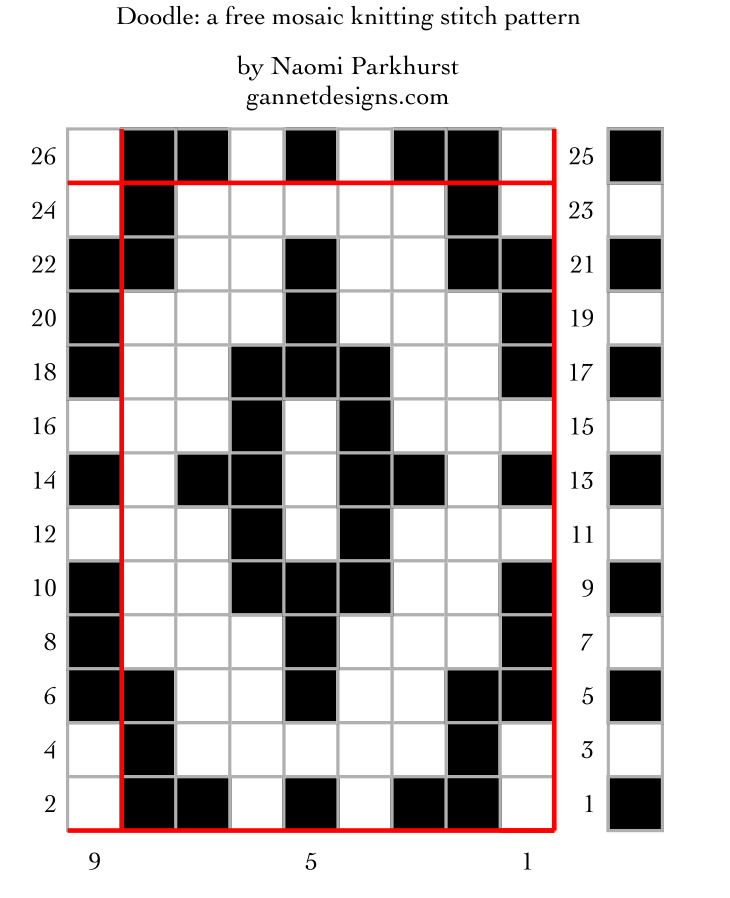 This is a Barbara-Walker-style mosaic chart for doodle. Each row of squares in it represents two rows of knitting (which is why there’s a row number at each end). The square in the column to the right of the row numbers indicates the color of yarn being worked in that line. So in rows 1 & 2, all black squares are knit or purled, and all white squares are slipped with the yarn being held on the wrong side of the work. In rows 3 & 4, all white squares are knit or purled and all black squares are slipped.

So how did this: 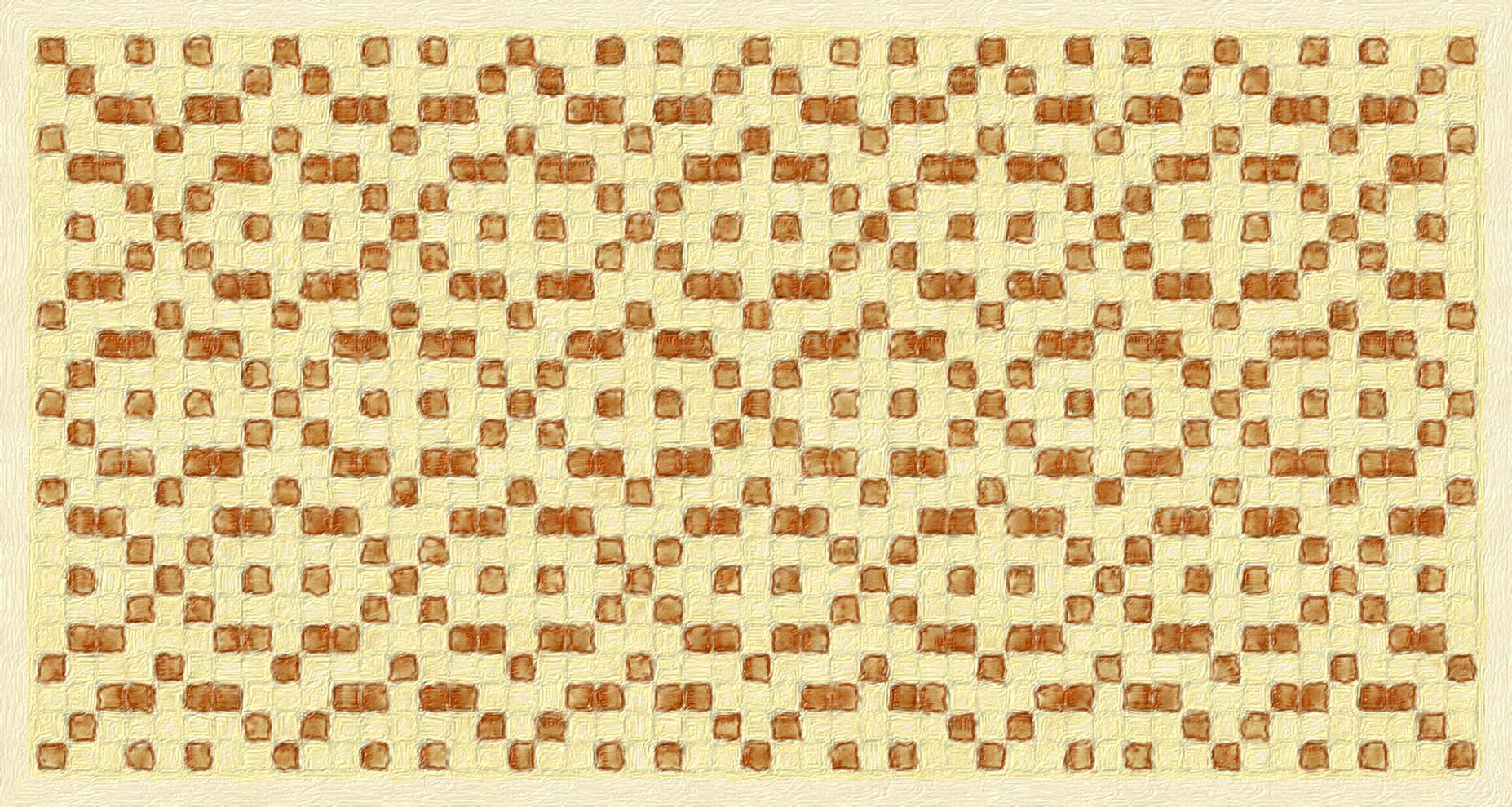 The key is to look at the dark squares on the original chart as representing actions rather than a finished design. At the most basic level, if I were to knit the original chart as colorwork in the colors shown, I think of that as “knit in the yellow yarn until I see a marked square, at which point knit with brown yarn”. When I make a knitting chart from a needlework chart, I replace the marked squares with standard knitting chart symbols, each of which represents an action.

When I doodled on graph paper to get the original chart, I was deliberately considering the factors necessary for a chart that could be made into several different kinds of stitch patterns; the main things are to not have too many marked stitches next to each other horizontally and not to have any marked stitches directly above any others.

An obvious thing to do would be to knit the original chart with a purl stitch in every marked square, and indeed I will probably do that another time. Or I could replace marked squares with YOs and then figure out where to put decreases. But this time, I made a mosaic knitting chart.

The three stages I use as shown in the illustration:

You can double-check that the final result is feasible with Scott Pakin’s mosaic knitting chart web app.

What questions do you have?