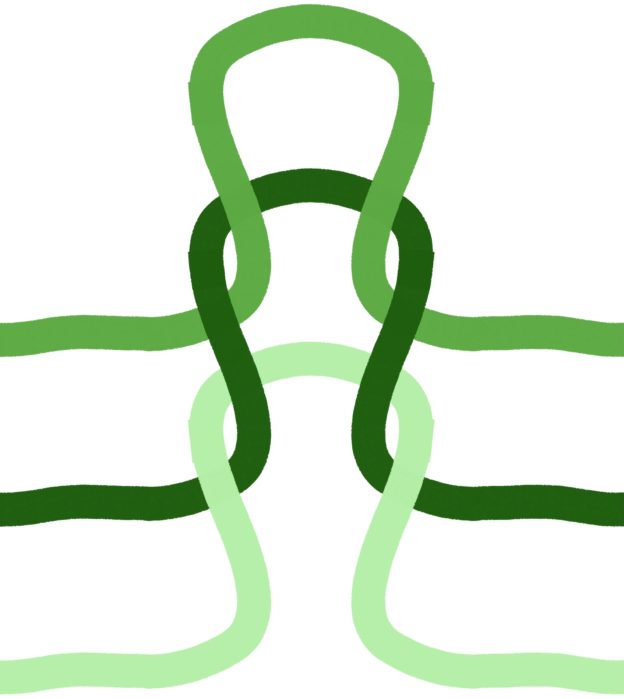 I’ve got a knitting technique structure thing I want to talk about, but I think it will be easier if I do it in stages, both to write and to read. So this time I’m going to write about basic knitting stitch structure.

Knitting is about final results, regardless of the method used to get there. So finger knitting, loom knitting, knitting on needles, and machine knitting are all different ways to produce knitting stitches. In this series of posts, I’m going to leave the tools used out of the picture entirely, and just show the stitch structures involved.

Here is an image of three strands of yarn laid out on a flat surface. Each one stretches from one side to the other in a mostly straight line. They’re laid out so they’re approximately parallel, but they don’t touch each other. No knitting has happened yet

Pull and rearrange the bottom strand of yarn so that it makes a loop that is laid on top of the middle strand of yarn. The bottom of the loop is open, but that doesn’t really matter; there are traditional forms of basic knitting where the loop has a half twist in it at the very bottom.

However, the knitting I do, and that I suspect most of my readers do, has the open loop. Also, I don’t think that Eastern Crossed Knitting would work for some of my later posts in this series*.

Pull the middle strand of yarn through the loop that was made with the bottom strand, and lay the newly-formed loop over the top strand of yarn.

Pull the top strand of yarn through the loop that was made with the middle strand, and lay the newly-formed loop down on the flat surface.

This is one column of three knitting stitches. The only stitch that is really secure is the middle one, and even that is a little precarious—the top stitch isn’t held in place by anything and could drop, at which point the middle stitch could also drop. The bottom loop doesn’t have anything really holding the bottom bends in place. Still, this is basic knitting. One loop has been pulled through another loop.

Several of the more technical books I’ve read like to define a knitting stitch in terms like this: “a structure where a continuous thread makes four changes of direction and is accomplished with two needles.” Because it’s loops that are involved, the middle strand comes into contact with each of the other two strands twice, making four places where the yarn can change direction.

That definition is from Margaret Stove’s Creating Original Hand-knitted Lace (p.18), and I think it’s the first time I’ve had a disagreement with her. The first part is true as far as it goes, but it seems overly generic. I think if I went looking at embroidery or other yarn crafts, I could find stitches that fit that definition but that don’t have the structure of a knitting stitch. I’ve already covered the question of tools in this post. This is nothing against Margaret Stove; I’m certain I’ve read this definition in other books as well.

*I haven’t tried it though. I wonder what would happen? (Just in case you were curious where my ideas come from; this is the kind of thing that prompts some of them.) I have made a note to give it a try later.