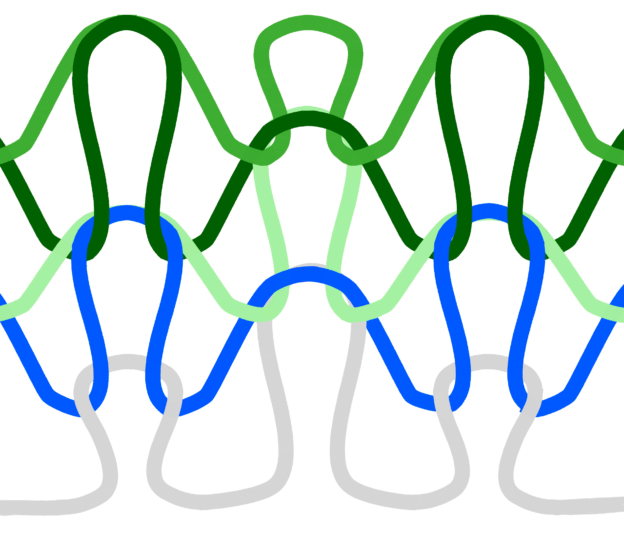 I’ve talked about knitted slipped stitch structure, where when a stitch is slipped, the yarn that would otherwise be pulled through the knitted stitch below forms a horizontal bar that can either sit in front of or behind the slipped stitch.

There’s one major remaining straightforward place for that strand of yarn to go when a stitch is slipped, and that’s to sit immediately on top of the slipped stitch. In hand knitting, this structure is called brioche.

Here are some instructions for brioche rib, which is the specific structure I will be illustrating. (I think these instructions for how to do it are great, but I have a disagreement with part of the introduction, which I didn’t have until I knit some swatches I’ll be showing you later, I hope next week.)

So! Here’s how brioche rib is put together: not the methodology, mind, but the final result.

The grey row is the row before the brioche really gets started, whether it’s the cast-on row, or the last row of some garter stitch, or some such. Because it’s the setup row, it acts a little differently.

The actual brioche rows start with the blue yarn. Here it knits one stitch as usual, and then, when a grey stitch is slipped, instead of being pulled through the grey stitch, the blue yarn rests on top of it. The maneuver that’s used to do this in this case is a yarnover. That is, the yarn is put in front of the needle and wrapped over it as the stitch is slipped. In most knitting, a yarnover makes a new stitch with no stitch underneath, but in this case, it changes the horizontal bar that would ordinarily sit in front of the slipped stitch into something like another stitch that sits in the same location. The blue yarn then goes on to knit the next stitch.

Now we’re past the first setup row. Pretend the blue yarn changed color to mint green at the end of the row. Also, I’m going to describe this as if this knitting were being worked flat. This is a little tricky; I’m not actually turning the drawing around. Please let me know if this is confusing!

Since this is ribbing, when I work on the other side, the stitches that were knit last time will be slipped and have associated yarnovers this time. So, starting from the left, the blue stitch in column 3 is slipped and the mint green yarn makes a yarnover above it. The next stitch is made by knitting the previously slipped stitch and its yarnover together as if they were one stitch. (It looks like a purl stitch because it’s being knit from the other side.) Working the slipped stitch and the yarnover together is what locks that yarnover strand into place so it stays up at the same height as the top of the slipped stitch; otherwise it would slip down and sit in front of or behind the slipped stitch. Finally, the stitch in column 1 is slipped and the mint green makes another yarnover above it.

Now the mint green will change color to dark green, and the work is again being done from the front.

The combination slipped-and-yarnover pairs are once again knit together, and the mint knit stitch is slipped, with a dark green yarnover going over the top.

The dark green will now turn to medium green.

As in the mint green row, the first and third stitches will be slipped, only with medium green yarn yarnovers sitting on top, while the middle stitch knits the previous slipped-and-yarnover pair together.

If I outlined them, it would look kind of like this (the diamonds would overlap the brioche more closely if the brioche weren’t drawn unevenly). This is what’s commonly called a half drop repeat in one common set of design terminology. I’d had no idea until working on these posts that this was the case for brioche rib; I think that’s pretty interesting. (Regular knit/purl ribbing is not a half drop pattern, by contrast. It’s the slipping on alternate rows that does this for brioche rib.)

Here are two photos of a tiny sample of two color brioche rib. On one side it’s relaxed, and on the other, it’s stretched out. When the fabric is not stretched out, a row of brioche rib looks kind of like /()\ /()\ /()\ /()\ . Each angled line in this arrangement, /()\, is half of the yarnover that sits on top of a slipped stitch. Between each pair of angled lines like this, \ /, there’s a stitch in the same yarn as the yarnover that’s really only visible on the other side. The legs of the yarnovers make it look as if there’s a knit stitch that’s kind of receding from the actual knit stitches, but that’s only an illusion.

What questions do you have about this structure?