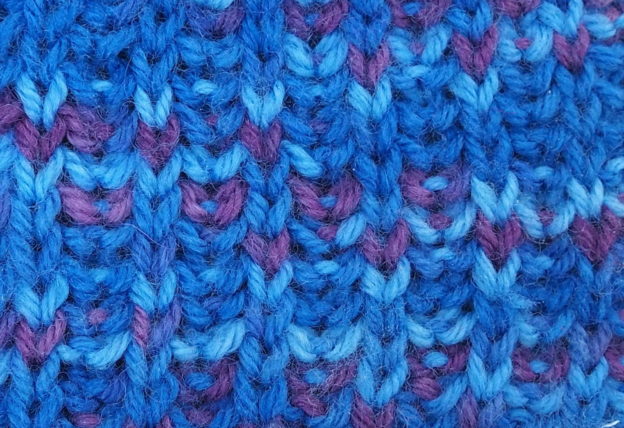 I was noodling around with swatches for a stitch pattern idea I had, and in the process came up with this stitch pattern that’s not in any of my stitch dictionaries, though I would have expected it to be. It’s pretty! It looks kind of like brioche rib, except that it’s flat, not all squishy. Now, I have to admit that the squishiness of most brioche is part of its appeal, but I could see wanting a firmer fabric with some of the same visual effect. I don’t know what this would look like combined with regular brioche. I haven’t tried it yet.

Although the brioche hides it, this is basically alternating single columns of brioche and garter stitch! These are both so squishy, it’s funny that this makes it flat.

I am really quite certain that other knitters must have come up with this before. For one thing, it’s a pretty standard variation on a stitch pattern that does exist: half brioche. For another, it’s an extremely simple pattern. That notwithstanding, here it is.

I’ve included both the usual sl1yo brioche method and the rarer k1b method, in large part because this is a case where the k1b method is genuinely easier: it’s got rest rows!