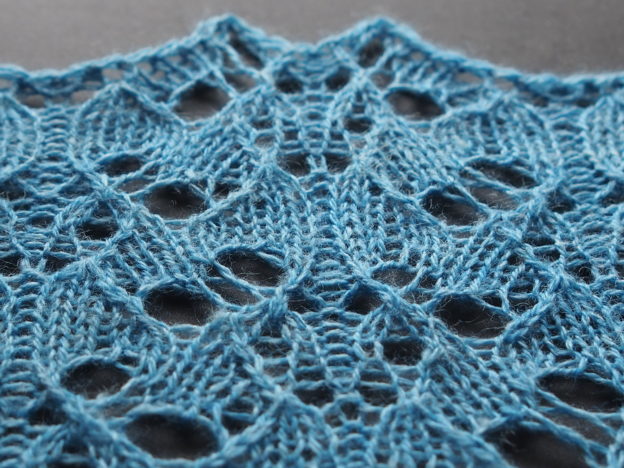 The first word I drew from the words suggested on Patreon this month is Weave, suggested by Catnach, a Patreon supporter. Occasionally the words I encode make me giggle for one reason or another. In this case, it’s the incongruity between the word weave, and the format of the stitch pattern I’m designing (which is knitting).

I don’t usually include a side view of my swatches, but I was having trouble conveying what I like most about this lace any other way, so the featured photo is one view and the flat view is above the chart because it’s easier to see how it works.

There’s an extra blog post with some actual weaving options for Weave. (How could I not?)

Each month, my Patreon backers have the chance to suggest words for me to encode as knitting stitches. I make three of these into knitting stitches each month: the second and third (posted on the first day of the next month) are drawn from the collection of new words; the first is drawn from the collection of unused words. A random number generator helps me choose these, and then I get to work, first turning the letters into numbers, then charting the numbers onto grids in various ways. Finally, when I make the chart into lace, I turn the marked squares into yarnovers and work out where to place the corresponding decreases. (I usually make lace; occasionally I make cables instead.) I also made a Weave needlework chart for any craft that uses a square grid for designing.

The stitch patterns are not meant in any way to look like the original words; the words are the seeds of my creativity.