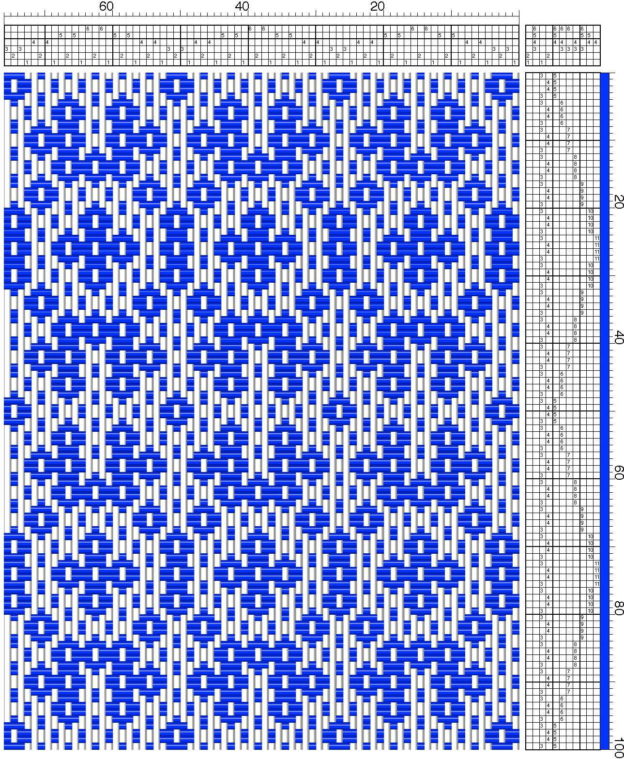 When the random number generator pulled the word weave out of the Patreon suggestion pool, I knew at once that I wanted to include a weaving blog post for it.

I’m going to include various possibilities, with some help from a more experienced weaver. I’m still a beginning weaver myself and making weaving drafts is still mostly a mystery to me.

Of course you could use the same number of ends threaded onto four shafts to weave a basic twill or whatever you like.

Alternately, you could use binary to encode the letters of the word and thread your loom accordingly, with color A where there are zeros, and color B where there are ones:

When I first started doing my knitting code, I went searching online to find out if there was anything similar; it turns out that weavers have the closest thing to what I do already: the name draft. Here are the name draft instructions that have made the most sense to me so far.

I couldn’t entirely figure out how to make it work with the word weave, however, so I’m not going to post a draft for just that word. I think the word is a little too short for success with any of the possible encodings shown at the link.

My next thought was to see if my needlework chart for weave could be converted into a weaving draft. After some conversations on Twitter after I asked for references to books about making such drafts (using a different chart as an example), I learned that it’s often easier to convert a weaving draft to stranded knitting than vice versa. I still hope to learn how in the future, but there really wasn’t time to figure it out if I wanted to make this post this week!

However, Lana Holden very kindly offered to make me a draft based on my chart for weave after looking at it to see if it was feasible, and here we are with a twill:

I am even more a beginner with tablet weaving, so this is just an idea that might not work. (If you are a tablet weaver, what do you think?) But if I encode weave into base 4 numbers because square cards have four corners, I get 113 011 001 112 011. By adding 1 to each digit, I can convert that into 224 122 112 223 122. What would happen if I threaded cards with two colors so that color A was threaded through that sequence of numbers across 15 cards, with color B through all the other holes, and then mirrored across 15 more cards to make it look like a deliberate pattern? I have no idea whether it would work well as a design or not. Also, I know there are tablets with other numbers of holes, and to that end, here are some encodings:

Anyway, feel free to run with these ideas; I hope you have fun!