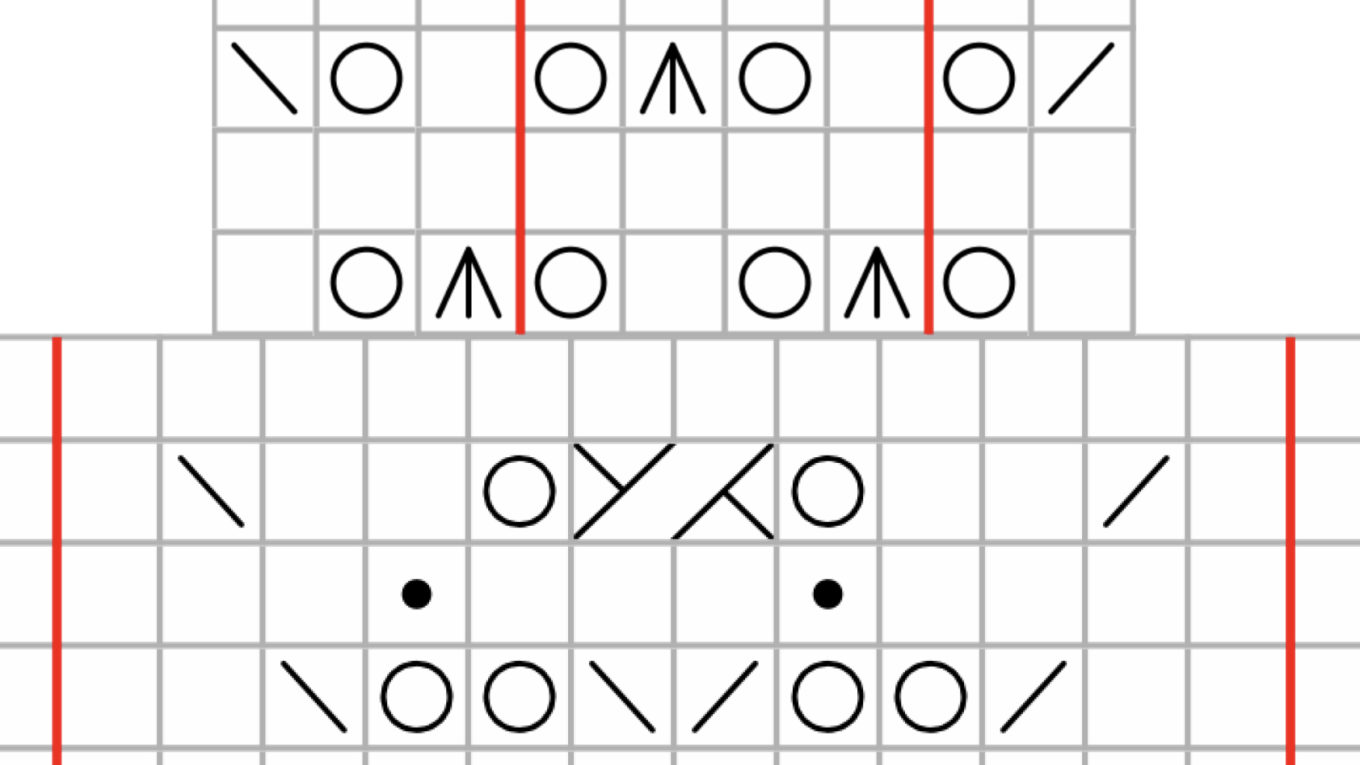 When I was knitting the Starry Flowers stitch pattern last week, its appearance reminded me a little of Star Rib Mesh, and that made me wonder if the two would work well together in the same project. Then I went and looked at the chart and realized that, no, it would not be an easy combination: the two stitch patterns have what I’ve come to think of as a parity mismatch. I’ve mused about this concept on Twitter and on Patreon, and now seems like a good time to explain the problem here.

Above is the Star Rib Mesh chart.

And here is Starry Flowers.

Star Rib Mesh is a multiple of 4 + 3 stitches. Starry Flowers is 12 + 12 stitches. If working in the round, the extra stitches (marked with a plus) are removed from the stitch count, so a 4 stitch repeat should theoretically fit in the same number of stitches as a 12 stitch repeat. However, this doesn’t work for these two patterns.

The difficulty is the location of the axis of symmetry. For Star Rib Mesh, that axis runs up the center of a stitch column (the one numbered 5 in the top chart above). For Starry Flowers, the axis is between two stitch columns: stitches 12 and 13 in the chart. This makes it impossible to line up the centers of the two stitch patterns by simply stacking the two designs on top of each other. There is a way to finagle this with transition rows, but the level of explanation involved is outside the scope of this blog.

Here they are stacked on top of each other with the axes of symmetry lined up: the stitches in one are offset by half a stitch compared to the other chart.

If anyone out there has found another knitting writer discussing this problem, I’d love to know. For now, I’m calling this a parity problem, after a long discussion on twitter. Parity is a term that has a lot of meanings in a bunch of different contexts; this meaning is related to its use in mathematics, where it refers to whether integers are even or odd. Thanks go to twitter user @fidgety_hands for this useful term.

Why post about it if I’m not going to explain the workaround for combining the two kinds of stitch repeats?

First, I think it’s interesting. Second, it’s a problem you might want to watch out for when combining stitch patterns. Third, I am gradually working on a database of my blog stitch patterns (access is locked for now to my patreon backers; it will be more accessible once I’ve entered the complete backlog). I will be labeling stitch patterns as having odd or even parity, to make it easier for people to choose stitch patterns that can be combined without messing with the transition rows.

What questions do you have? Is anything above unclear?