Tomorrow is Worldwide Knit in Public Day, and so here’s a link to two stitch patterns I designed in previous years to go with that:

END_OF_DOCUMENT_TOKEN_TO_BE_REPLACED 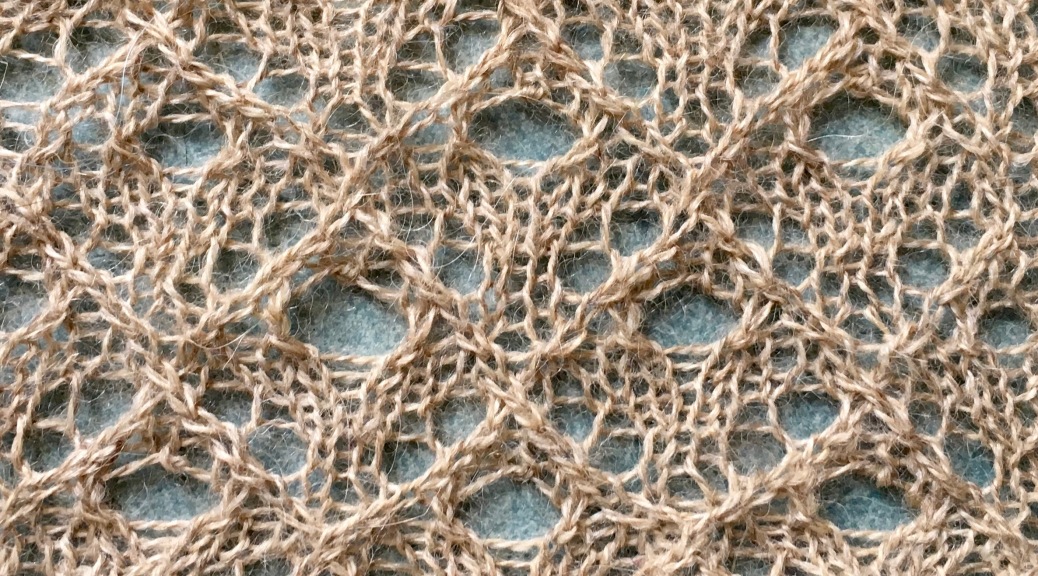 22 September is Hobbit Day because it is the shared birthday of Bilbo and Frodo Baggins. I therefore encoded 22-9 as a stitch pattern and present it to you here as one of my geek holidays stitches.

END_OF_DOCUMENT_TOKEN_TO_BE_REPLACED

Last year, I made a colorwork chart for World Wide Knit in Public Day; this year I made a lace design. These are part of my series of stitch patterns I’m making for what I call “geek holidays” (which obviously includes knitting, to my mind).

END_OF_DOCUMENT_TOKEN_TO_BE_REPLACED

This is part of a series of stitch patterns I’m making sporadically that go with fiber arts or geeky holidays. In this case, I’ve encoded KIP (knit in public) for World Wide Knit in Public Day, which is coming up on the 18th. It’s always a Saturday in June.

I’m a little out of practice with colorwork, but I still like the result!
END_OF_DOCUMENT_TOKEN_TO_BE_REPLACED

It’s Pi Day, at least when dates are considered from the US point of view: it’s 3/14 today. My husband is using this as an excuse to bake pie. I’m using it as an excuse to make another stitch pattern using the first five digits of pi: 3.1415.

I particularly like the unexpected way that if the knitting ends after row 2 or 8, there’s picots to be pinned out.

END_OF_DOCUMENT_TOKEN_TO_BE_REPLACED

A little late for Talk Like a Pirate Day, here is an encoding of Arr. There’s been a gradual increase in the number of geeky Internet holidays, and so I thought I’d make stitch patterns for a bunch of them (secret code being geeky in itself). Admittedly, I’m not personally fond of Talk Like a Pirate Day, but it is one of the older such holidays, and well known. It wouldn’t seem fair to exclude it. (Anyway, I like the lace that came out of it.)

I saw a stitch pattern on Pinterest that had a plain row of elongated stitches in the midst of lace. Since the first row of this chart doesn’t have any yarnovers, I decided to try it, but didn’t really care for the effect in this design. I’ve left it in the swatch that’s the featured photo to show what it looks like. I knit several plain rows, then knit the first stitch pattern repeat with elongated stitches in the first row. Then I knit two more plain repeats.

I think this might qualify as a feather and fan variant. (If you wanted to knit row 2 instead of purl, that would increase the resemblance.)

END_OF_DOCUMENT_TOKEN_TO_BE_REPLACED

Just for the fun of it, I’m going to post occasional stitch patterns in honor of geeky days on the calendar.

So what is Tau Day? Tau is a constant twice as big as pi, and it is apparently more useful than the number pi. Here is the Tau Manifesto for your mathematical pleasure. The main thing for my purposes is that 6/28 is a date that approximates Tau.

Therefore, I have encoded 628 as charts for lace knitting, knitted cables, and a grid for use in any craft that can use a grid as instructions. (This is not, of course, all of Tau; it just seemed like a useful stopping point.

END_OF_DOCUMENT_TOKEN_TO_BE_REPLACED

Here’s the collection of geeky holidays I have so far (thanks in large part to my friends on Google+), starting with the one that’s next to arrive:

You might be wondering what I’m going to do with these. I plan to turn them into stitch patterns, of course! I’m not going to do all of them in a year; I’ll work on them sporadically as I feel like it. You will note that some of them are math jokes (i.e. Tau day), some are random (i.e. Talk Like a Pirate), some have to do with string geekery, and some celebrate certain fandoms (i.e. Towel Day). Feel free to suggest more; I don’t want more than one for a given fandom, though. I also don’t want the dates of fan conventions. (There’s too many). And I reserve the right to skip some if I feel like it.

I’ve had a suggestion for the 8th day of each month, which is apparently sacred (in South America) to Mary, the Untier of Knots. I’m not sure it fits in so well, but I’m thinking about it.