Lacymmetry is a shawl that makes me happy. I like the lace, I love the lines of the shawl, and the way it all came together is just plain satisfying. I hope you enjoy it as much as I do!

END_OF_DOCUMENT_TOKEN_TO_BE_REPLACED

I realized yesterday that I’ve gotten behind on getting blog posts ready because I’ve been obsessed over the last few weeks with knitting some lace shawl samples. (One is done, one is getting blocked today, and one is just getting started.) I was just going to let today’s blog post go, but then I realized I can share some sneak peeks of the shawls in question because I’m planning to self-publish them.

END_OF_DOCUMENT_TOKEN_TO_BE_REPLACED

I’m pleased to say that I have a pattern in Knitty!

Longwing is a double garter stitch crescent shawl with two chevrons inserted in the middle. The result sometimes reminds me of part of a star shape, but more often makes me think of a butterfly’s wings. There’s something fun about wearing butterfly wings without it being obvious.

END_OF_DOCUMENT_TOKEN_TO_BE_REPLACED

If you like my stitch patterns, but you don’t want to figure out your own pattern for a finished object, you’re in luck! There are several designers who’ve used them in patterns you can buy, including me.

END_OF_DOCUMENT_TOKEN_TO_BE_REPLACED

Nim Teasdale and I collaborated together on Helianthe (Ravelry link). She suggested sunflower to me and I encoded it as stitch patterns to suit the sorts of designs she likes to make. This is a pattern that will suit a variety of weights of yarns and can be worked to more than one size. Here’s more information on Ravelry. (No Ravelry account required for purchase.)
END_OF_DOCUMENT_TOKEN_TO_BE_REPLACED 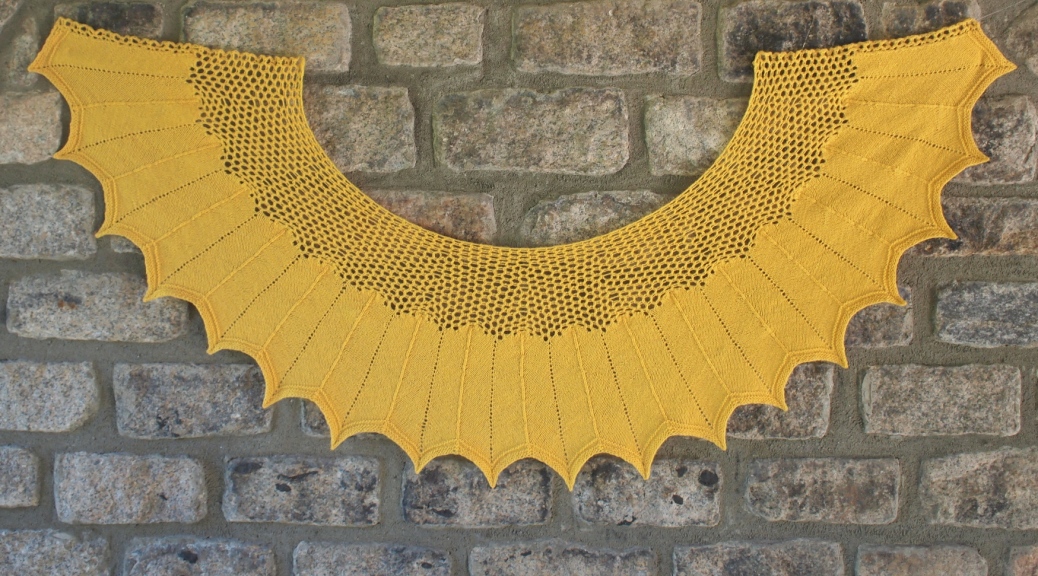 When I decided to knit a shawl based on sunflowers, I really had no idea what I wanted to call it. Shortly after starting work on this shawl, it was International Women’s Day, and I was reminded that my great-grandmother had been a suffragist in Kansas as a teenager. While looking around on the internet for information about Kansas suffragists, I happened across the information that they used the Kansas sunflower as a symbol. The name for my shawl became obvious, as did its purpose.

The shawl is shaped like a letter C: cast on a somewhat long inner edge, work honeycomb mesh outward for a while with some shaping, work a mildly complicated transition (with some patterning on two wrong side rows), finishing up with chevron petals. The outer edges have some garter stitch to counter curling. The petals can easily be made longer or shorter to accommodate different quantities of yarn.

END_OF_DOCUMENT_TOKEN_TO_BE_REPLACED 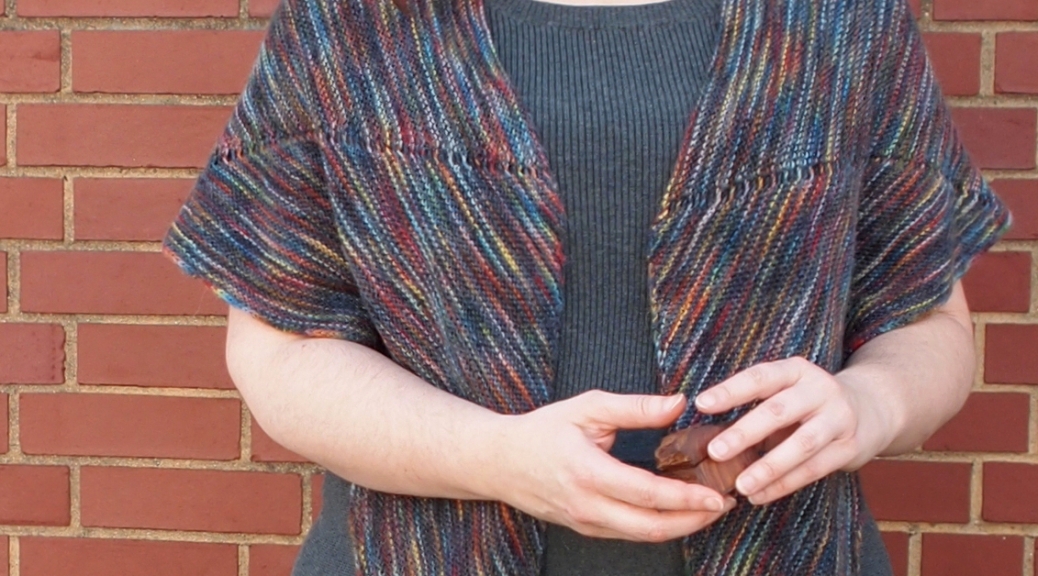 New Hope Creek (Payhip link) is designed to be knit with two skeins of yarn that coordinate with each other but that don’t match exactly. The shape is crescent-like — formed by knitting five triangles pointing in alternating directions.

The sample is knit with one muted skein and one that’s wildly variegated with short runs of color; I think of this as one mild and one wild. Many variations are possible: one gradient and one wildly variegated yarn, two self-striping yarns with different length stripes, multiple scrap yarns left over from other projects, even two solid yarns. Instructions are also provided for working with a single yarn.

END_OF_DOCUMENT_TOKEN_TO_BE_REPLACED 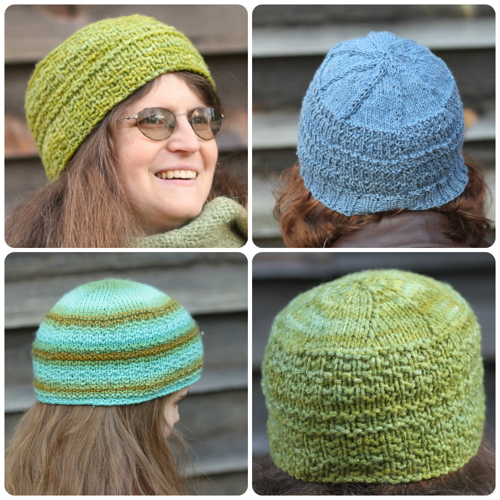 There are days when I need to acknowledge unpleasantness, but keep moving forward. On those days, my motto is onward. I made this hat as a tactile reminder to myself for those days.

I took the letters of onward, encoded them as numbers, and then charted those numbers, using my methods for encoding words as patterns. The marked squares were turned into purl stitches, and thus I made this stitch pattern.

This is a top-down hat. It can be ended when the yarn does if necessary; the pattern has sufficient purls in it that it doesn’t curl. A shorter hat will be a cap; a longer one can cover the ears for warmth; an even longer one can be slouchy. Knit the crown and some ribbing in a contrast color if desired. I have seen this hat worked to good effect in solid yarn, tonal yarn, variegated, and self-striping. Gradient would also be fun!

END_OF_DOCUMENT_TOKEN_TO_BE_REPLACED 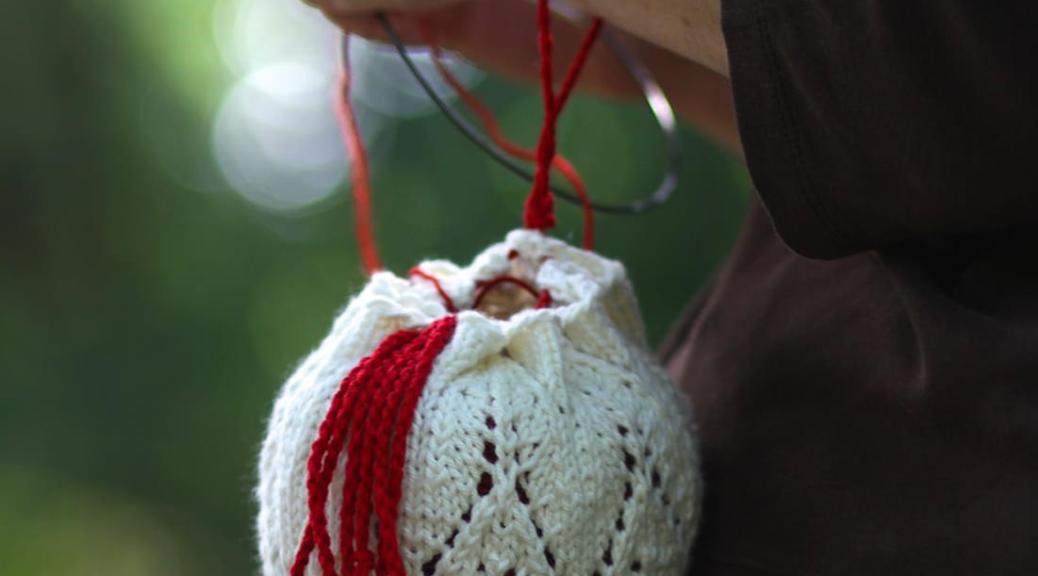 One of my favorite spring wildflowers is bloodroot, Sanguinaria canadensis. The design on the bottom of this bag, with its asymmetrically-spaced petals and squarish shape, reminds me of that small white flower.

This lace bag, knit from the center outward, will carry yarn, a handkerchief, or other such things. The stitch pattern is based on the Arrow Pattern from Barbara Walker’s Second Treasury.

The bag also makes a fetching child’s cap without the drawstring.

END_OF_DOCUMENT_TOKEN_TO_BE_REPLACED

The phrase bread and roses originated in the early twentieth century in the American labor movement. There are stories about it being sung as part of a song by strikers, which seems to be apocryphal. The meaning is not, however: Bread and Roses stands for the desire for both fair wages and dignity. The slogan has particularly come to be associated with a textile workers’ strike in Lawrence, Massachusetts in 1912.

I looked up the individual concepts for bread, roses, and labor unions in the Dewey Decimal System (used to catalog books in many libraries in the US) and then placed the numbers on a grid as a starting point for designing this lace. The yarn overs in the alternating columns of lace in the middle are placed based on bread and roses; the border is generated with the numbers for labor unions. Decreases were placed to form undulating lines; occasional two-stitch cables highlight this effect.

(For more on this method of designing stitch patterns, see my blog posts on embedding meaning in knitting or other crafts.)

This pattern can be used to knit a rectangular scarf or stole.

Happy Labor Day! (As observed in the US.)