Sarah Sipe’s Circulus has been released. This is the last of the six hats we have designed based on ancient spindle whorls; the others can all be found in the ebook collection, Our Heads are Spinning. 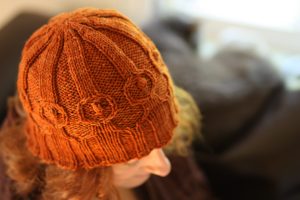 Whorls featuring circle designs have been found at archaeological sites around the globe; the circle-with-dot is nearly as widespread. The whorl that inspired this particular design came from a Roman-era Coptic site (Egypt), but similar whorls have been retrieved from German, Sassanian (Iran), Bactrian (Afghanistan), and Mexican sites.

This beanie features a variation on the banjo cable with a two-row nupp in the center to mimic the common circle-with-dot motif.

END_OF_DOCUMENT_TOKEN_TO_BE_REPLACED

Many spindle whorls are decorated with little circles, and so this hat is covered with many circles created by crocheting the traditional Catherine’s Wheel stitch pattern and then outlining the circles with chain stitch. The hat name is a bit of a pun on the traditional stitch pattern name: whorl because of spindles; Katherine in honor of the five women named that in my knitting group who all spell it with a K.

I wanted to combine several of the crafts that use yarn, so I embroidered my circles and knitted the brim (instructions for an alternate crochet brim are provided). Use surface crochet to create much the same effect as the embroidery.

I’ve found that crocheting with a single strand of yarn and knitting with the same yarn doubled makes the two match up well in terms of both stitch gauge and appearance. I made use of that principle in this hat.

This pattern is intended for confident crocheters. No in-depth tutorials are provided.

This beautiful new hat pattern from my friend Sarah looks complicated, doesn’t it? It’s called Mighzal, which means spindle in Arabic. She took the concepts of using writing as decoration on spindle whorls and the concept of a Kufic square, which rotates the same word around the four sides of a square to make a complex looking tile, to create a hat pattern which will let the wearer proclaim their love for spindles. 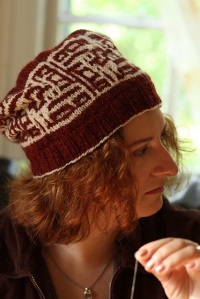 It looks really difficult, but is only a step up in difficulty from knitting a hat with two-row stripes. The technique of mosaic knitting, refined by Barbara Walker, lets the knitter not only work with only one color at a time, but count stitches only on every other row because the first row in each stripe defines quite clearly what happens in the second row.

Here, let me show you with a swatch:

END_OF_DOCUMENT_TOKEN_TO_BE_REPLACED

So my friend Sarah Sipe and I have been designing hats inspired by spindle whorls. She designed one that was more broadly inspired, and it’s in today’s KnittySpin! Lots of spindles have circles, stripes, chevrons, or zigzags. This one has all of them and is a lot of fun to knit. I like that it’s top down. I like that the top is based on the pi shawl increases rather than the kind of increases I use. (I like them both, but they look very different.) I knit two samples for her; one is the commercial yarn hat that’s on the official page. The one above is knit in Mountain Meadow Wool Cody.